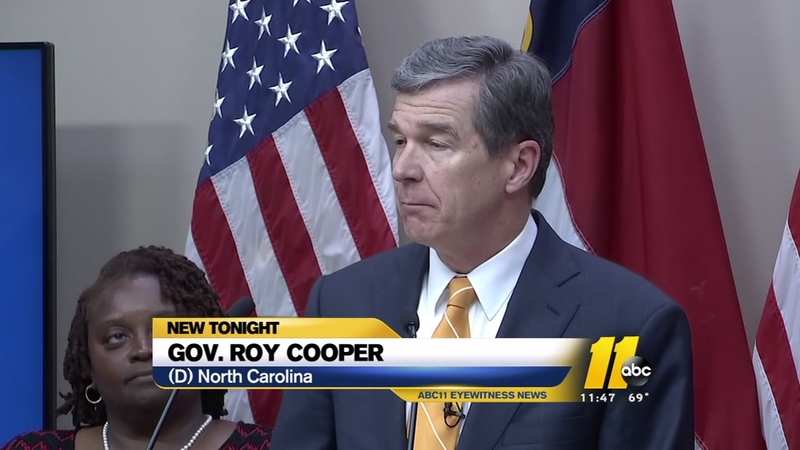 Gov. Roy Cooper said in a news conference Monday that the budget approved by the Republican-controlled General Assembly last week "doesn't cut it."

"The Republican legislature's budget keeps income tax breaks for corporations and families making more than $200,000 a year instead of investing in education," Governor Cooper said.

The General Assembly gave its final approval to a nearly $24 billion plan for the year starting July 1.

The Democratic governor has until next Monday to sign it, veto it or let it become law without his signature.

"Unfortunately, everyday North Carolinians were shut out from this year's budget process in an unprecedented authoritarian power grab by legislative leaders," Cooper added.
Cooper and his allies haven't been happy with what the GOP put inside the plan and what it left out. Cooper wanted more money for teacher raises and recommended some income tax breaks taking place in 2019 be blocked.

“This budget deserves to be vetoed and I’ve just done that a few minutes ago”—@NC_Governor #ABC11 pic.twitter.com/IZ7MBetBnC

"The budget I'm proposing is a product of listening to every day North Carolinians," Cooper said. "The day is coming soon when the state budget will value education, clean water and health care but until then this budget is vetoed."

Also, Cooper recommended a stipend for school supplies and a $130 million investment in improving school safety.

this is senate bill 99 that republican leaders sent to @NC_Governor. He vetoed it today. But republicans tell me they will over ride the veto. where the budget goes from here coming up after the #NBAFinals on #abc11 pic.twitter.com/IVbUZ95U3n

"We have to invest more in public education but Republican legislators not only ignored the message those teachers brought but had the audacity to claim the legislature had done enough for public education," Cooper said.

"It's an election year and you have to look at everything he does from a political standpoint," Berger said. "His proposal will create a deficit next year and it's not sustainable. I guess it's really no surprise."

Kevin Shanahan, a social studies teacher at Enloe High School with more than 20 years of service, said he will not get a raise this year.

"The primary reason I became a teacher was it provided me an opportunity to give back to my community...to provide service," Shanahan said. "It's just that the whole system is designed to punish veteran teachers.