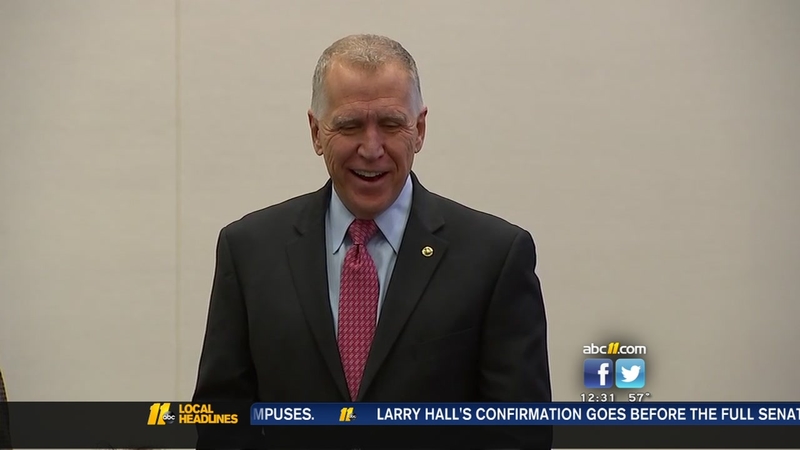 A group of protestors gathered outside the event held in Research Triangle Park saying they want to talk to the senator about issues such as health care, immigration, and the Trump administration.

Speaking about the town hall issue at the luncheon that about 100 people paid to attend, Senator Tillis said he's not interested in holding meetings that're just a "choreographed protest of people shouting at each other."

"What we want are wise people talking," he said. "Say whatever you want to. Don't call me a name. I will never call you a name."

Tillis also called himself "one of the freest members of the U.S. Senate" because he's more interested in getting things done than worrying about losing his job.

"I don't really care if I get reelected. I'm not sure if I'm going to run for office again," he said.

Outside the luncheon, protestors demanding to speak with the senator promised it would be a civil conversation.

"I would promise that if everybody out here could go to a town hall we'd be civil. I want to hear what he has to say and I'd like to hear the questions from constituents in regards to what he has to say," said Michael Eisenberg of Raleigh.

Taking questions from the people who attended Monday's event, Tillis said he supports the idea of term limits for lawmakers in leadership positions to promote more turnover at the top. He said he supports non-partisan redistricting, and plans to spend significant time on immigration reform that balances law and order with rational and compassionate policies.