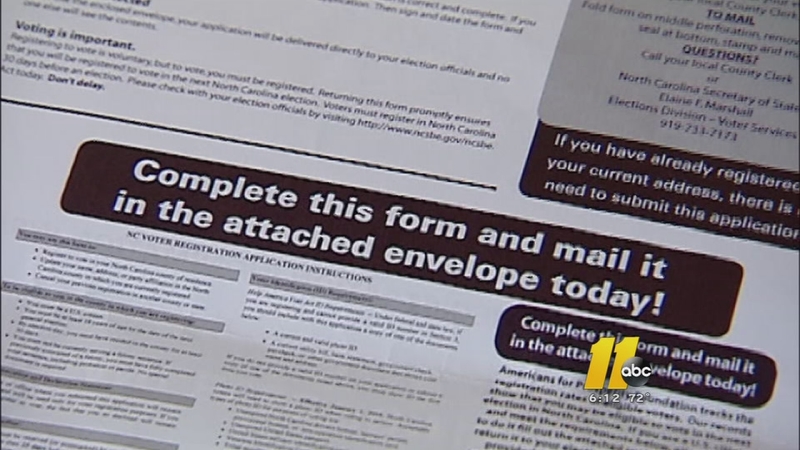 RALEIGH (WTVD) -- Hundreds of complaints are flooding into the state Board of Elections after hundreds of thousands of official looking mailers went out to voters and non-voters around the state.

The ABC11 I-Team dug into what happened and why and talked to voters who are outraged over the mistake.

It didn't make any sense. Jennifer Odom's daughter shouldn't have gotten anything in the mail, let alone a voter registration form.

"It was disturbing for a couple of reasons," said Odom. "First, Samantha would only be four-and-a-half years old. So it's a far cry from the age of voting. Secondly, she passed away two years ago."

"That's right about the time we started getting these notices," said Odom.

To date, she has gotten three mailers addressed to her daughter, but what she hasn't been able to figure out is why.

"She would have been four years old," said Odom. "There's no reason at all that they should have her information because she wouldn't be of voting age."

Brad Crone, a Democratic consultant, explained how that might have happened.

"More than likely, what they did was pair the voter list against consumer data and didn't scrub the list against the U.S. Postal service 'dead file'."

Still, Crone said there may be something to read through the lines in that lack of attention.

"If you didn't do your due diligence on scrubbing the data," Crone wondered, "what is the ultimate motive that you're trying to accomplish? It really does raise a really big question mark as to the motives. When any entity, any organization that's going to make an outreach effort to try and to engage in the political process, in the voting process, you got to get it right."

The group behind the mailing is the sharply conservative, Koch brothers-backed Americans for Prosperity Foundation. AFP Deputy Director Donald Bryson quickly apologized for the error.

"It was a mistake," Bryson said. "We're not going to make any bones about it. We made mistakes in the mailer."

There are other problems beside who received the mailer. It has factual mistakes as well. It gives voters the wrong deadline for registration and directs them to the wrong state agency to sign up. Bryson chalks that up to a possible "cutting and pasting" mistake.

He also says the problems are superficial insomuch as they don't give bad information that would suppress votes and says that because of the mailers, 5,000 more people have already signed up to vote this year. Still, Bryson apologized about the mistakes.

"We're really sorry that mistakes like that did happen and we're going to try to correct those errors," said Bryson.

Bryson told ABC11 that they are taking Odom's daughter off their list, and they plan to mail out corrections to everyone who got the inaccurate mailers.

Meantime, local boards of elections told ABC11 that they are swamped with complaints and calls from voters confused by the mailers. The state Board of Elections said they've taken hundreds of calls in the last week-and-a-half.