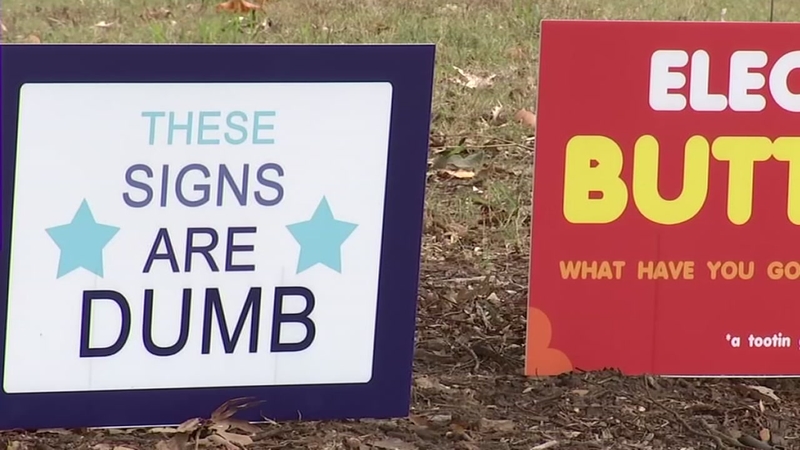 RALEIGH, N.C. (WTVD) -- Amid the fields of political signs planted across Wake County this election season, there are also campaign signs for Sasquatch. Another sign reads, "Elect Butts." And another simply states, "These Signs Are Dumb."

"It's just kind of strange. I've never seen anything like it," said Raleigh voter Trey Batton.

Reaction in Raleigh to the bizarre rash of political trolling was mixed or just confused.

"I thought it was kind of clever," said Raleigh voter Anna Monroe. "I mean it's an interesting way to get people's attention."

Batches of fake campaign signs are popping up across Wake County. Some voters are confused; others laughing. Some candidates don't find it funny. #ncpol #abc11 pic.twitter.com/k6I1VnPnnQ

No one seems to know who put the fake campaign signs up. But unlike the legitimate campaigns, these tongue-in-cheek signs, which seem to mock this brand of roadside campaigning are not regulated by the Wake County Elections Board. The fakes aren't required to print who paid for them.

"I figured it was real," Monroe said about the "Elect Butts" signs, which have popped up along several intersections, including ones at Creedmoor Road, Glenwood Avenue, and Peace Street.

Kim Coley is not laughing. She is the Republican candidate in the District 4 race for Wake County commissioner. Before she realized the fake signs were posted near all the candidates' signs, not just hers, she thought it was a personal attack. She still finds it disrespectful of the political process.

"I took it personal. And I thought, they just didn't like my signs," Coley said. "I guess that's a sign of protest, but there's got to be something there because what are you protesting, democracy? What, a candidate?"