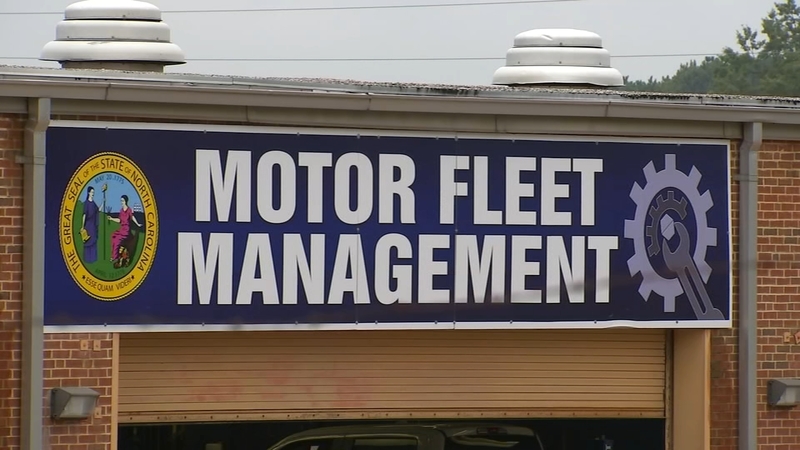 RALEIGH, N.C. (WTVD) -- The state's division of Motor Fleet Management abdicated its role overseeing the use of the state's fleet of cars used by state workers.

Wood told ABC11 that the law is clear.

"It says that Motor Fleet Management is responsible for the rules and the policy," Wood said. "It also says that they can delegate the enforcement of these policies. They read it as we can delegate to the state agencies just to take care of the cars themselves. Not true."

Her agency's audit uncovered a number of problems even though it only looked a small sample, about 10 percent, of the state's fleet of more than 7,500 cars.

The sample showed seven cars were assigned to state workers who didn't have a driver's license.

Four cars were assigned to people who no longer worked for the same state agency.

And 61 cars were registered to people who no longer even worked for the state -- and some of them had been gone for as long as 10 years.

That includes unauthorized commuting by a Department of Motor Vehicle inspector, a State Highway Patrol sergeant, and other state employees.

The audit report includes a letter from the state Department of Administration which oversees Motor Fleet Management.

It thanks the auditor for the report and pledges to fix the problems.

Wood said she is confident the secretary of DOA will indeed take care of the issues.

"She's very accepting of the information and she's putting policies and procedures in place to fix this as we speak. And this is the system is supposed to work," Wood said. "I find the issues and we point them out to the heads of the agencies and then they fix them."

She said she expects it will take about a year for DOA to fix the problem.

Late Wednesday afternoon, a spokesperson for the state Department of Public Safety issued a statement to ABC11 about alleged wrongdoing by its employees mentioned in the audit.

"The two investigations and audits involving DPS staff mentioned in today's State Auditors report, occurred in 2016. Under the current leadership, the State Highway Patrol has revised the relevant policy as recommended by the State Auditor and the involved member was subject to disciplinary action. In the second investigation, one of the involved employees is no longer with the department and the authority to utilize a state vehicle for commuting was rescinded for the remaining employee. The Department has increased efforts to ensure employees are aware of the state motor vehicle policies and remain in compliance," wrote Highway Patrol First Sgt. Michael Baker.
Report a correction or typo
Related topics:
politicsraleighnccarsstate politicsnc highway patrol
Copyright © 2021 WTVD-TV. All Rights Reserved.
TOP STORIES
5 killed when SUV struck bridge near Capital Boulevard were all teens
Body of man recovered from Falls Lake, Durham deputies say
Wake County commissioners adopt non-discrimination ordinance
Rep. David Price will finish his term but not seek reelection
Man wanted in killing of pregnant 911 dispatcher turns himself in
2 killed in fiery 3-car crash in Fayetteville ID'd
Show More
Colin Powell dead at 84 from COVID-19 complications
Man arrested for allegedly stealing SUV with child inside in Raleigh
Search happening near Rowland, NC for missing Robeson Co. woman
Man behind controversial Trump Russia dossier speaks out
Police officer killed in crash on I-540 near Knightdale
More TOP STORIES News