WTVD
By Michael Lozano
PRINCETON, N.C. (WTVD) -- In the heat of a tense election season, a Princeton neighborhood has dealt with a string of "Biden-Harris" campaign signs being stolen.

Frederick Henry has been a resident of the town for about 10 years. In that time, the active voter, who just voted for former Vice President Joe Biden and Kamala Harris on this year's ticket, said he has never dealt with this kind of response to his campaign signs, saying, "this election is very contentious."

On Monday, while Henry was at work, a next-door neighbor called him and told him that several "Biden-Harris" signs were taken off people's property, including his own lawn.

Just around the corner, nearby neighbor Beverly Hillard said the same thing happened to her while she was shopping on Saturday. The longtime resident in the neighborhood said her "Biden-Harris" and "Governor Roy Cooper" signs were stripped, only leaving the wired remains.

"I went to the Democratic Party and bought my signs, so nobody should be trying to take my signs," Hillard said.

'Don’t come in people’s yards and trespass or commit larceny': A Johnston County neighborhood has seen a string of "Biden/Harris" signs stolen in the last week. At 11, hear from several outraged homeowners & what law enforcement is saying about campaign sign thefts. @ABC11_WTVD pic.twitter.com/EUnIt7Xbz5

The Princeton Police Department told ABC11 that it has received several official reports from that neighborhood about the recent thefts.

Officials with the Johnston County Sheriff's Office said they've been dealing with a lot of weekly complaints and reports regarding stolen signs, something they naturally deal with during an election cycle.

In recent weeks, the sheriff's office said, most of the campaign sign thefts and vandalism have involved "Trump-Pence" signs; it's been the case in nine out of 10 of the reports they receive. They say it' has made this string of incidents stick out.

Henry said he feels like people are trying to intimidate him and other Biden supporters. Since the theft, he's been on the lookout for anyone trying to do the same thing to his new signs.

"Get out and vote for whoever you want to vote for and ... just ... don't come in people's yard and trespass or commit larceny,. he said.

Meanwhile, Hillard said she's not afraid to protect her property and possessions. 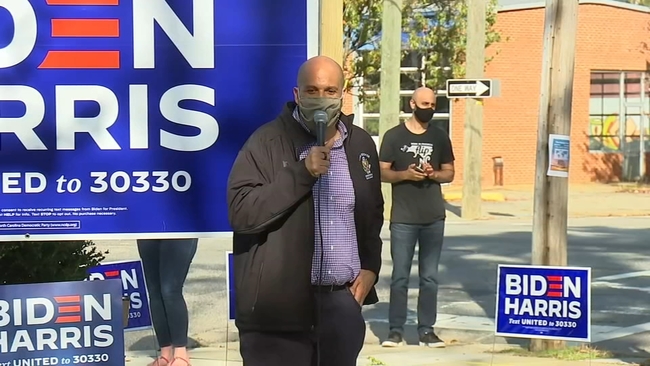