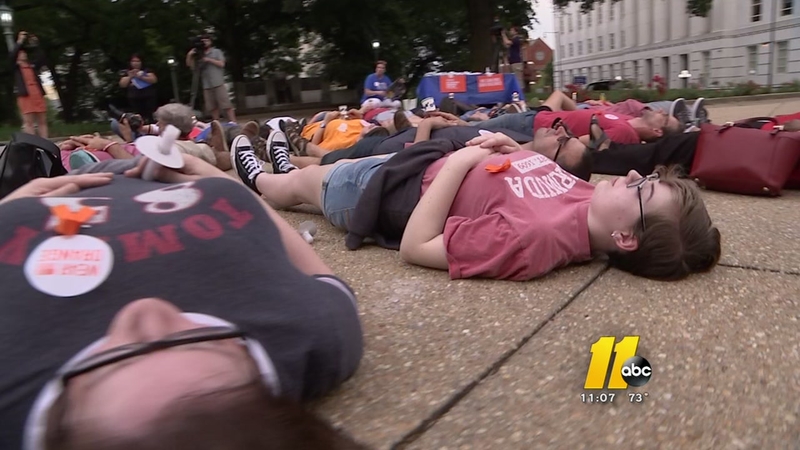 RALEIGH, NC (WTVD) -- They wanted their bodies to illustrate the toll of gun violence. So they laid head to foot along the south side of the State Capitol at sunset Wednesday, in somber remembrance of the eight students and two teachers shot and killed at Santa Fe High School in Texas this month and the dozens of others killed in school shootings.

Before the "die-in," this group of teens and adults made their plea at the podium to lawmakers to take action on gun violence.

"This is a call to the government because enough is enough," said Uriel Rodriguez, a Wake County middle school student.

The vigil has now turned into a “die-in” to remember the victims of gun violence. #abc11 pic.twitter.com/eRfsHNnBJt

Lauren Smith, a student at Holly Springs High, called on the state lawmakers to heal wounds that seem to keep reopening: "We need to get to a point where we can truly say, never again," she said.

Aaron Wolff, a survivor of the 2007 mass shooting at Virginia Tech told the crowd he was still thinking about what Republican Wake County Sen. John Alexander said at Tuesday night's town hall at Sanderson High on school safety -- about young people's responsibility in tragedy prevention.

Alexander said, "I'm talking to you students because you know what's going on in your school. You know if you've got a student who's a little off and having problems - you know that."

Wolff argued Alexander was putting the burden on the wrong people.

"This is the same type of victim blaming nonsense that people make when they say a woman was assaulted because her skirt was too short," Wolff said.

The event was organized by the NC Grassroots Activist Coalition - calling for what they contend are common-sense gun reforms:

"The fact that we're here and recognize the problem, that's the first step to fixing the solution," Barakat said. "And being here is what we can do."

Chinese lanterns for each one of the victims of the #SantaFeShooting #abc11 pic.twitter.com/NZ6Li6I6re