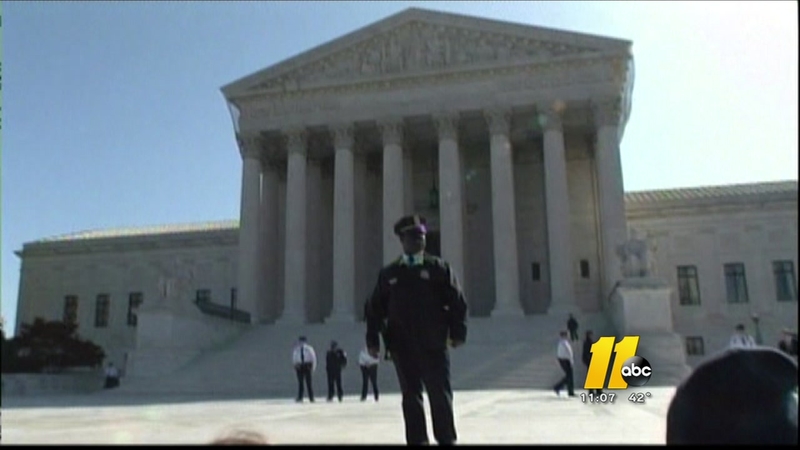 The Supreme Court says its order will stay in place at least until the court decides whether to hear an appeal the state previously requested. If the justices take up the case, the stay will remain in effect pending a decision.

If no special elections are required, the next round of General Assembly elections would be held in late 2018. The GOP currently holds majorities large enough to override any vetoes by newly installed Democratic Gov. Roy Cooper. Special elections could give Democrats a chance to narrow those margins and give leverage to Cooper.

The voters who sued alleged that Republican lawmakers drew the boundaries to create more predominantly white and Republican districts by effectively cramming black voters into adjacent Democratic districts. GOP lawmakers said the majority-black districts were drawn to protect them against lawsuits alleging they violated the U.S. Voting Rights Act.

The state's attorneys filed the request for a delay of the lower court's ruling with the U.S. Supreme Court late last month. They noted that the Supreme Court already had heard oral arguments in lawsuits involving congressional districts in North Carolina and state legislative districts in Virginia, and that its decisions in those cases are pending. The justices' eventual ruling could provide guidance about the use of race in North Carolina's maps, the attorneys said.

Requiring the remapping could have affected more than two-thirds of the 170 House and Senate districts, according to GOP leaders, meaning most lawmakers elected to two-year terms in November would actually only serve one year. Republicans at the legislature have been suspicious of other court rulings striking down boundaries that have been upheld in state court.

"We are grateful the U.S. Supreme Court has quashed judicial activism and rejected an attempt to nullify the votes of North Carolinians in the 2016 legislative elections," House Speaker Tim Moore and Senate leader Phil Berger - two of the defendants in the lawsuit - said in a release.

Anita Earls, the chief attorney representing the voters who sued over the maps, wrote earlier in the week to Chief Justice John Roberts asking that the redistricting and special election remain in place, saying millions living in the gerrymandered districts first drawn in 2011 shouldn't have to wait until the end of next year for constitutional representation. Her organization pointed out after the ruling that the underlying decision by the three judges declaring the districts unconstitutional remains in place.

"We continue to trust that the (lower) court's ruling will be upheld and new districts ultimately will be drawn that are not based on race," Earls said in a release.

In a final written argument to Roberts earlier Tuesday seeking the delay, attorney for the state Paul Clement said the requirement of special elections was "entirely unprecedented and entirely imprudent" given the circumstances.

"There will be no way to undo a special election that will have ousted duly enacted legislators and overridden several indisputably constitutional provisions of the North Carolina Constitution if this court grants review and reverses only after that election has occurred," Clement wrote.

Roberts, who considers emergency appeals for the region covering North Carolina, referred the state's request to the entire eight-member court for consideration, the order said. The justices will consider taking up the case when they meet during their Jan. 19 conference. Even if they agree to hear it, the case might not be heard until the court begins its next term in the fall.

The NC Democratic Party also weighed in on the court's decision.

"I am confident that when the U.S. Supreme Court considers this case later this month they will uphold the decision of the lower courts, which found a clear pattern of racial discrimination in the gerrymandered districts drawn by Republican legislators in Raleigh." said NCDP Chairwoman Patsy Keever. "Representative Moore and Senator Berger's continued opposition to legislative districts that fairly represent all North Carolinians speaks volumes to how far they will go to protect their political power."