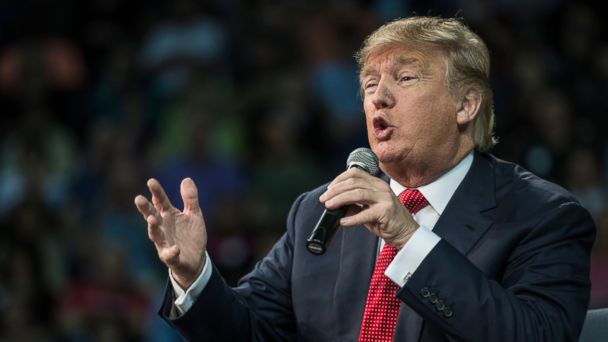 It has been nearly a month since the last time the Republican presidential candidates gathered for a debate. Since then, terrorists have killed more than a hundred people in a coordinated attack in Paris and on U.S. soil.

At the center of the Tuesday debate stage in Las Vegas will be front-runner Donald Trump, who called on "a total and complete shutdown of Muslims entering the United States," last week. This statement shifted the political conversation and created fears that unchecked borders will allow fundamentalist, Islamic State-affiliated Muslims to commit violent crimes like the murders in San Bernardino, a mass shooting that took the lives of 14 in California.

On Monday, following a rare meeting at the Pentagon with security officials, President Obama acknowledged American worries about the threat ISIS poses at home and abroad.

"We recognize that progress needs to happen faster," the president said. "Even as we are relentless we need to be smart, targeting ISIL surgically and with precision."

But as the administration amplifies efforts to destroy ISIS strongholds on the ground, Republican presidential candidates have criticized the White House's national security agenda.

Jeb Bush has called for a no fly zone in Syria. Ted Cruz has spoken out against allowing Syrian refugees to enter the country. Rubio has warned against cutting defense spending. Chris Christie has raised concerns over Iran's nuclear capabilities. Ben Carson and Carly Fiorina have recently called for stronger Internet intelligence surveillance.

On CNN's State of the Union Jake Tapper spoke with Trump, probing the GOP front-runner on his controversial religious testing idea. Trump claimed the ban would be temporary, but stood by it.

"You have radicalism in this country," he said. "It's here and it's trying to come through."

The threat posed by Islamic terrorists is a top concern facing voters across the country, with ISIS operatives recently charged in states from Minnesota to Maryland. In a national NBC/WSJ poll released on Monday, 40 percent of Americans named national security and terrorism the primary concern for the federal government, up 19 percent since April.

Trump's opponents scoffed at the idea of a Muslim ban with some calling the proposal "unconstitutional," "outrageous," and a transparent attempt to shift media attention back on his campaign following a slight dip in the national polls and Cruz's surge in Iowa.

"Donald Trump needed the spotlight back," Fiorina told the Des Moines Register. "It's a violation of our Constitution, but it also undermines the character of our nation. We stand for religious liberty."

But polls suggest his policy has tapped into Americans' growing fears. An ABC News/Washington Post poll released on Monday found that 36 percent of Americans and 59 percent of Republicans support Trump's proposed Muslim ban.

On Sunday's "Meet the Press," Rubio disagreed with Trump's proposal but said that Trump "is reminding us in the process that people are really upset and they're really scared. And they're worried."

But Trump's proposal has sparked fear among Muslim Americans.

During the past week, anti-Muslim criminals have vandalized mosques, threatened hijab-wearing students, and even physically assaulted Muslim neighbors. This time frame comes shortly after the San Bernardino attack, which was committed by two ISIS-inspired Muslim Americans.

As the Justice Department predicted, there has been an uptake in anti-Muslim hate crimes.

Saba Ahmed, founder of the Republican Muslim Coalition, told ABC News that she will be carefully watching the debate "to see which candidate understands that Islam is not terrorism."

"He's using fear tactics," said Ahmed. And while she said her coalition has been pleased with how some Republicans have come out in support of Muslim Americans, she fears others are missing the important and valuable role members of her faith could actually play in homeland security.

"I want to hear solutions-how are they going to be listening to Muslim Americans to solve our national security challenges?" she asked. "I think it's going to be a very important role-- we're the only ones who have the solutions to our problems, we're the only ones who can actually deflect and destroy that ideology in our religion. What the terrorists are doing is completely un-Islamic and we must take back our faith from them."