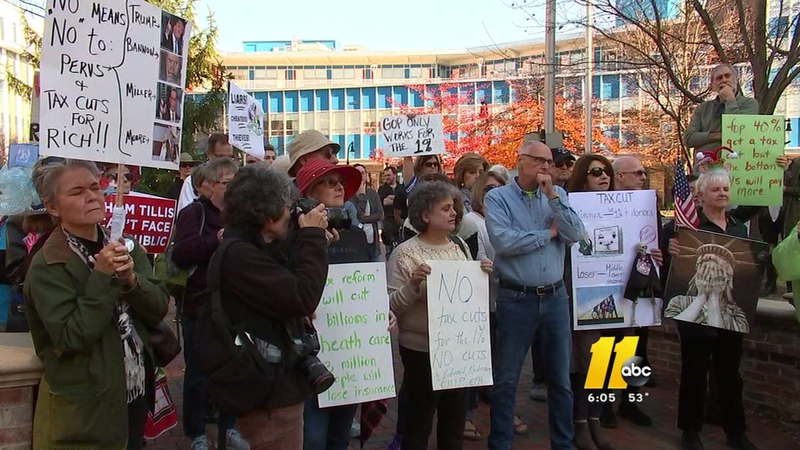 The Senate's $1.5 trillion tax reform bill would eliminate the Obamacare mandate, and cut the corporate tax rate from 35 to 20 percent.

North Carolinians with a yearly salary over $100,000 could receive a big tax cut.

However, those taxpayers making less than $75,000 could pay more in taxes over the next 10 years.

On Sunday, the state GOP praised the plan for giving tax breaks to working class people.

The GOP released this statement saying:

"With this critical vote, Senate Republicans took the next step in delivering tax cuts and letting working-class Americans keep more of their hard-earned paychecks. By making good on their promises to overhaul our tax code, Senator Burr and Senator Tillis are putting the people of North Carolina first and giving our economy a much-needed boost. I hope Democrats get off the bench to work with Republicans as the House and Senate work together to finalize this tax cut plan." - NCGOP Chairman Robin Hayes

"Not now not ever," said Jamie, a protestor at Sunday's event. Jamie says each year she itemizes her medical expenses due to her chronic health conditions. With the tax reform looming, she fears that will stop if the plan becomes law.

"The potential drain on my finances scares me. What will I have to sacrifice if this becomes law? Which one of my conditions will become untreated," she said.

The Senate version of the tax bill still has to be reconciled with the House version before President Trump signs it into law.
Report a correction or typo
Related topics:
politicsdurhamprotesttaxes
Copyright © 2021 WTVD-TV. All Rights Reserved.
TOP STORIES
CDC reverses course on indoor masks in some parts of US
800K COVID-19 vaccine doses in NC could expire by end of August
LATEST: Cooper to 'review changes to CDC guidance'
As COVID-19 cases surge, nervous parents prepare for school year
Why this Haitian restaurant relocated from Brooklyn to Edgecombe Co.
Latinos leading the way in new home ownership in US & in central NC
Show More
4-year-old dies after report of drowning in Harnett County
Mother, boyfriend charged after 5-year-old's death in Aberdeen
70-75% of Black women impacted by uterine fibroids
Man convicted of killing USC student who mistook his car for Uber
Simone Biles explains why she 'took a step back' from team finals
More TOP STORIES News