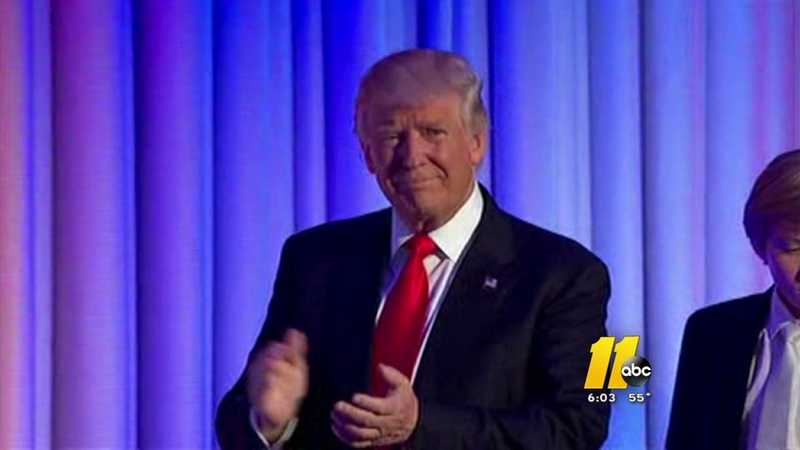 RALEIGH (WTVD) -- An election night stunner sent shockwaves across the country as Donald Trump was declared the winner in the race for the White House just after midnight Wednesday.

Gene Foley also woke up to the results in disbelief.

"It was a surprise. I wasn't ready for that. I thought it wouldn't go that way," he said.

But the victory brought a renewed sense of hope to Trump supporters.

The billionaire businessman turned battleground North Carolina red once again, getting slightly more than half of the votes and carrying nearly all of the suburban and rural counties outside the state's largest cities.

"I think it's time for supposed change. Like Obama said, everyone is a little tired of what's happening and what's going on, so they are looking for hope, for someone, an outsider to come in and do his thing," said Richard Camos.

Her supporters still reeled from the loss Wednesday.

"I stayed up until Hillary was losing, and then I just went to sleep because there was no more hope," said Arriana Ramirez.

"I was shocked. Shocked is the word. I never thought he would pull it off," said Sidney Harr.

Trump called for "partnership not conflict" during his victory speech.

Both parties called for unity Wednesday.

Voters agree they are ready move forward after one of the most contentious and divisive presidential battles in American history.