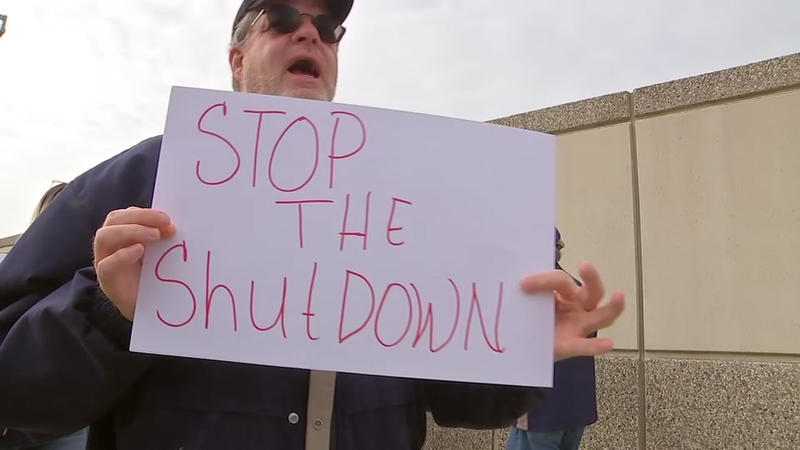 The union for local TSA workers picketed outside Terminal 2 to protest the government shutdown.

The rally was organized by the American Federation of Government Employees. In their news release, they said they picketed to "protest the use of federal workers as pawns in the political fight in Washington."

Tonight at 11 passengers are talking about their recent experience with @TSA during the #GovernmentShutdown as union for workers plans a rally outside @RDUAirport tomorrow. #ABC11 pic.twitter.com/pN4NeQ0uyW

Union officials could not say how many TSA workers have called out at RDU but the percentage of airport screeners missing work hit 10 percent over the holiday weekend across the country.

"It's time to figure out something -- like enough is enough," said Amy Foster, who was worried about the TSA lines at RDU Tuesday night. She drove down early from Lynchburg, Virginia, to catch her flight to Phoenix.

John Madden, of Raleigh, travels for business and said he hasn't seen security lines affected in places like Sacramento and Cincinnati.

"I'm glad that the folks that are not getting paid are still showing up to work," he said.

Gusto Farm to Street in North Raleigh is one of a handful of restaurants pitching in to help affected workers. On Tuesday they offered a free pizza or salad to workers.

"We're not really sure how long this shut down will continue to last but we're trying to help in any way we can," said Tyler Stallings. "We just wanted to show them that we actually care about our community."

Tonight we ran into @DukeFOOTBALL coach @DavidCutcliffe at @RDUAirport. He weighed in on the government shutdown and @TSA agents in general as a big rally is planned for the airport tomorrow. #ABC11 pic.twitter.com/sCOuKj4gM0

ABC11 also ran into Duke Football Coach David Cutcliffe at RDU on Tuesday night as he was making his way through security.

"I've been to Newark, Boston, LAX and I've thanked a lot of TSA workers," he said. "I think if you have a heart, you're very aware of what's going on. I don't think it's wrong to sit here and thank these people to work and do this without pay. I've been thrilled with the service and I've been saddened by the whole thing.