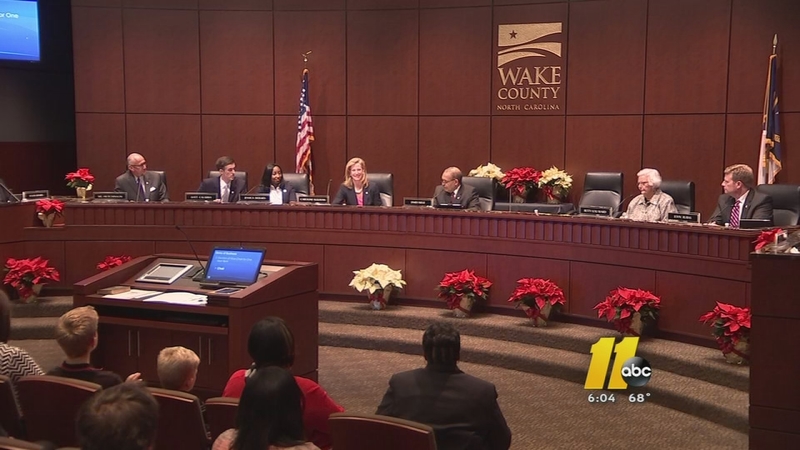 RALEIGH (WTVD) -- "Kennel Attendant" may not be something most people aspire to, but it is one of the more appreciated jobs at the Wake County animal shelter. It also happens to be one of the lowest paying. But that may be about to change.

"I think it's going to be great for the staff," said Shelter Director Jenn Federico, "It's coming at a great time of year."

Federico is talking about a possible hike in the minimum wage for county employees.

"I'm happy for my staff because there's only so much we can give them in our roles," Federico said. "This is just going to be huge for a lot of them. And they do so much for these animals, we want to make them happy too."

Monday, county commissioners will vote on raising the minimum wage from the federal $7.25 to $13.50.

The jump would affect about 75 of the county's roughly 4,000 employees and cost taxpayers about $100,000 more a year. For county Commissioner Matt Calabria, it makes all the sense in the world.

"We spend a lot of time on the county commission trying to figure out how to fight poverty," Calabria said. "The least we can do is make sure that we're not responsible for it ourselves as employers."

Calabria has been pushing for the hike for months. He says county staff looked at other municipalities and counties around the country to arrive at a final dollar amount and come up with best practices.

$13.50 will make Wake County the second-highest paying local government in the state. Top to bottom, the eight municipalities with elevated minimum wages are:

"If you want your folks to work hard," said Calabria, "if you want to reward hard work, which is exactly what we want to do, then you ought to act like it. We ought to make sure that our employees can put their best foot forward without fear or concern or worry about paying for child care or paying for basic needs."

But not everyone agrees that a higher minimum wage is the way to achieve those goals.

Former Wake County commissioner Phil Matthews, who Calabria beat in the last election, worries about the message it sends to businesses and says it's a slippery slope to a universally higher minimum wage throughout the county.

"If the county starts this and it becomes mandatory later on, how's that going to affect our economy later?" Matthews asked. "I'm for people getting a good salary and good benefits, I support that 100%, but I don't think the county needs to start this. I think it's primarily politics and I think the taxpayers are going to pick up the bill. And if it starts here, where's it going to wind up going?"

What's more, Matthews continued, "you have that situation where you have employees who are at that level or maybe a little bit above it, and all of a sudden, somebody's been here 6 months is making the same thing I am and that creates a situation there as far as morale is concerned."

Federico says a higher minimum wage will make her more competitive as a business.

"I'm out there trying to hire the best people and keep them," Federico said. "The better pay you can offer, the more likely you are to bring those people into your organization. This is an entry-level position as one of our kennel attendants, but it's not without the ability to move up in our organization. I think anything that will attract people in is a huge benefit."

And in this case, she says, you couldn't find a more important job to value than - in this case - the one with the smallest paycheck.

"They're really our first line of defense with disease," Federico said. "They work with these animals every day. They're the ones caring for them, cleaning their kennels, feeding them. Without [kennel attendants], we wouldn't be able to function."