WTVD
By Tim Pulliam
CHAPEL HILL, N.C. (WTVD) -- Sunday was the battle of the bullhorns, as supporters of UNC-Chapel Hill's Silent Sam Confederate monument and those who oppose it faced off where the statue once stood.

"We don't dialogue with (expletive) fascists!" yelled one counter-protester.

"Oh, what a vernacular," replied a Silent Sam supporter. "You kiss your mother with that mouth?"

The battle over #SilentSam is a back and forth shout match between protestors against the monument and those fighting for it @UNC. The @UNC_System rejected the school’s proposal to build a $5.3 million history center to house the confederate statue. #ABC11 pic.twitter.com/8Wsq8dTRlV

The showdown comes just days after the UNC Board of Governors rejected UNC-Chapel Hill's $5.3 million proposal to build an education and history center to house the now-defaced statue.

Supporters of Sam said it should not go in a museum.

"The law says it needs to be put back (on its pedestal)," said Jenna Bernstein, a supporter of Silent Sam.

Counter-protesters say to them Silent Sam is a symbol of oppression against black Americans and is intimidating for non-white students and so-called marginalized groups.

The sides verbally sparred all day.

"If you attack me, I will put you in your grave," shouted a Silent Sam supporter who was arguing with a counter-protester while leaving the campus.

"You all are associated with the same group that marched with swastikas and murdered Heather Heyer in Charlottesville," shouted a counter-protester who suggested the pro-monument group gathered Sunday share similar ideals with the group who held a white nationalist rally in Charlottesville last year.

"I'm Jewish, and I'm tired of hearing Nazi, Nazi, Nazi. What, are you kidding me?" Bernstein said. "I agree that there is a lot of systemic racism and anti-Semitism. We really need to fix that and fixing that is having an open dialogue."

It's still not clear where Silent Sam is stored.

UNC has until March to figure out what to do with the statue.
Report a correction or typo
Related topics:
politicschapel hillorange countystatueprotestuncstate politicsconfederate monumentsilent sam
Copyright © 2020 WTVD-TV. All Rights Reserved.
SILENT SAM 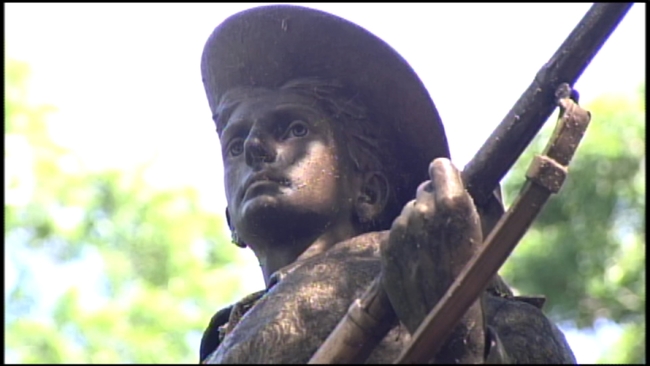