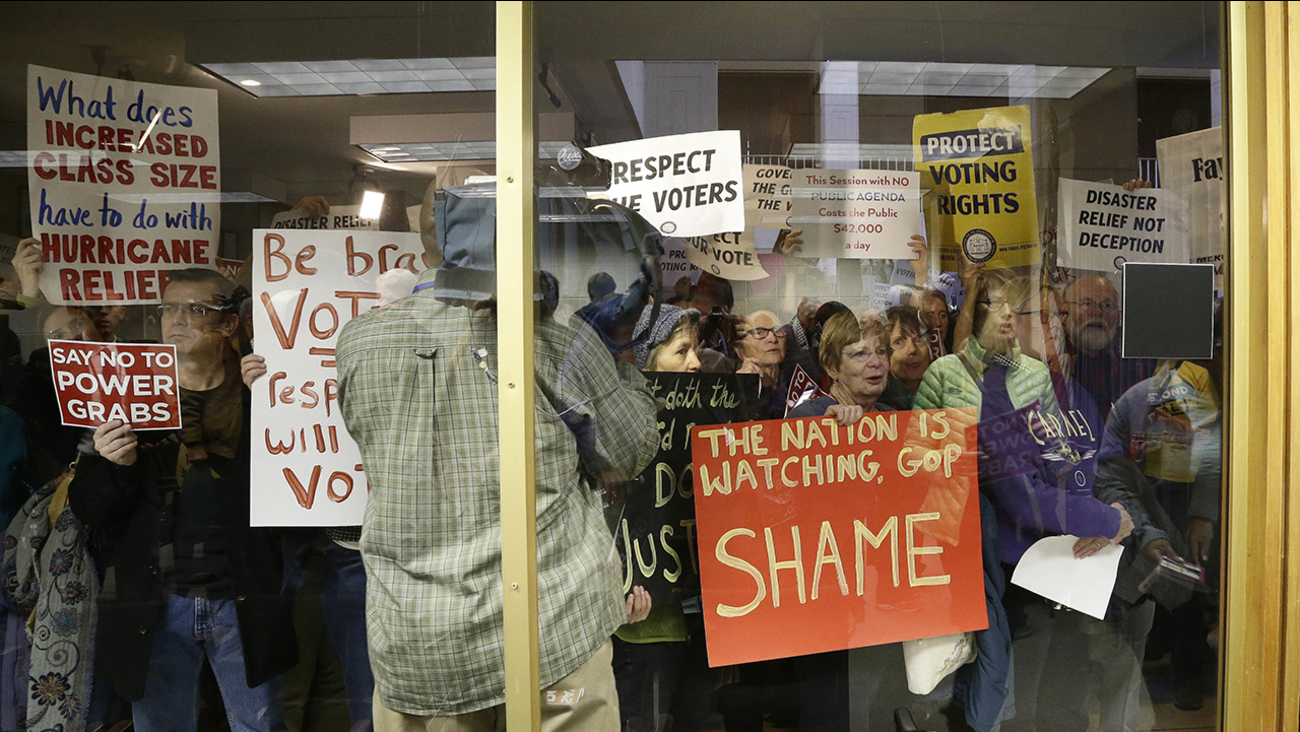 Protestors gather outside of a press conference room during a special session Thursday. (Gerry Broome)

WTVD
North Carolina is making national and international headlines for a surprise special called session in its General Assembly. What exactly is going on?

North Carolina politicians were already meeting in Raleigh for a special called session on recent disasters in the state (Hurricane Matthew, flooding and wildfires). Soon after that special session wrapped up on Wednesday at noon, Republicans announced a surprise second special session for 2 p.m. that day to discuss "any matters critical to the state."

The session concluded late Friday afternoon and lawmakers are headed back home.

Governor-elect Roy Cooper narrowly defeated Republican Pat McCrory by some 10,000 votes in a hotly contested race. Republicans hold a super-majority in the North Carolina General Assembly and Democrats are accusing Republicans of a "coup" in an attempt to limit the new Democratic governor's power. On Wednesday one leading Republican said his party was "reasserting its constitutional authority."

"I think to be candid with you, that you will see the General Assembly look to reassert its constitutional authority in areas that may have been previously delegated to the executive branch," Rep. David Lewis (R-Cumberland) told reporters.

Cooper has condemned the moves.

Cooper added that he will file lawsuits against any legislation he feels is unconstitutional.

McCrory has not weighed in on the proceedings.

What bills have been passed?

Several bills have been filed but two in particular drew ire from Democrats-- House Bill 17 and Senate Bill 4.

House Bill 17 sharply reduces the number of governor appointees to state government. It requires all of the governor's top agency heads to be approved by the Senate and it strips the governor of his power to appoint trustees to the boards of UNC System schools.

Senate Bill 4 has been signed into law by Governor McCrory. The bill dramatically reshapes the governor's power in election oversight. Previously, the governor appoints a majority of state election board officials on the five-person panel. SB4 expands the board to eight members. The governor appoints four, Republicans select the other four. Republicans call it bipartisan good governance. Democrats called it a power grab.