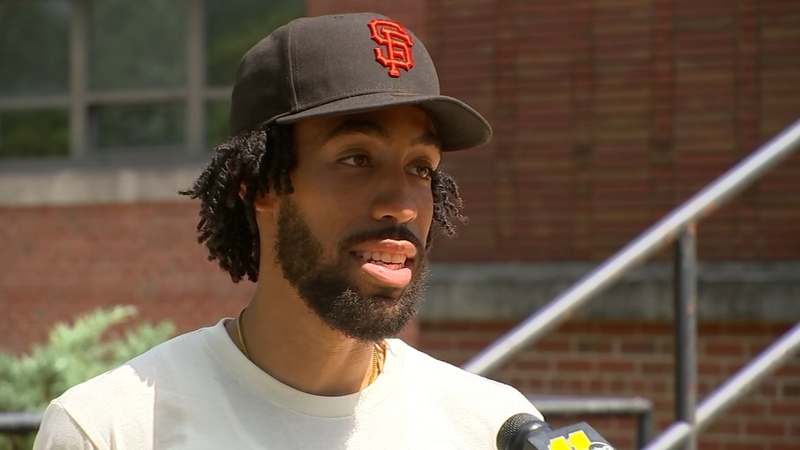 DURHAM, N.C. (WTVD) -- Poobie Chapman was the point-guard on NC Central's first-ever NCAA tournament team back in 2014. He was never flashy, they had other people to do that, but Chapman was always the steady hand on the Eagles wheel. He was a leader then and he's a leader now.

"It's just a matter of being that voice. I feel like there needs to be a bridge. And it just so happened I'm at the age in the middle between the younger generation and kind of the older generation."

Poobie is among the tens of thousands who have hit the streets in the past couple weeks to protest the death of George Floyd. Now, he wants to help channel that energy into lasting, positive action.

Chapman says the connections of grassroots basketball in North Carolina will prove invaluable in organizing. Content creators HoopState have partnered with him and will be pushing out information and education.

"To have allies that want to help, and that are literally like man we're at your service. I think that you can't ask for resources or a network bigger than that."

The most important thing at this point in his mind is coming together and developing a specific, coherent plan.

"Having demands which articulate exactly what we need. How much, how important equity is and everything that we're doing. That next step is all of us getting on the same page."

Chapman has already got one event ready to go. June 19, he'll be joined at Roberts Park by the likes of John Wall, TJ Warren and others for an event called the "No Pressure Initiative". High school seniors can have SAT test fees and college application costs covered.

For Chapman's former college coach and now friend LeVelle Moton, it generates a unique feeling of pride and a sense of a mission accomplished.

"He's always had a mind of his own and had a different type of charisma and persona than any kid I've ever coached and he's using it to better enhance the quality of life of others around him so I'm super proud."

As Chapman was influenced by Moton, so too will he influence the next wave.

"Guys in my generation, we have to do a good job. The guys above us have to do a good job at not really spoon feeding but giving them an opportunity to do research for themselves and have their own voice."
Report a correction or typo
Related topics:
sportsdurhamdurham countynccu basketballgeorge floydnccudurham county news
Copyright © 2022 WTVD-TV. All Rights Reserved.
TOP STORIES
Snow possible this weekend but major impacts not expected
Supersonic jet startup Boom to open factory in NC
Triangle contractor going to prison, must repay $4M
Amy Schneider's historic 'Jeopardy!' run comes to an end
NCDOT, local Food bank preparing for possible winter weather
How to store and care for KN95 and N95 masks
NCDHHS tool highlights how childcare woes pre-date pandemic
Show More
Number of people of color seeking mental health care rises
US Marshals Service share details into solving years-long cold case
Maintenance orders pile up at Raleigh Housing Authority
LATEST: Wake County reduces COVID-19 testing hours
NC leaders pushing workforce development to help state's economy
More TOP STORIES News