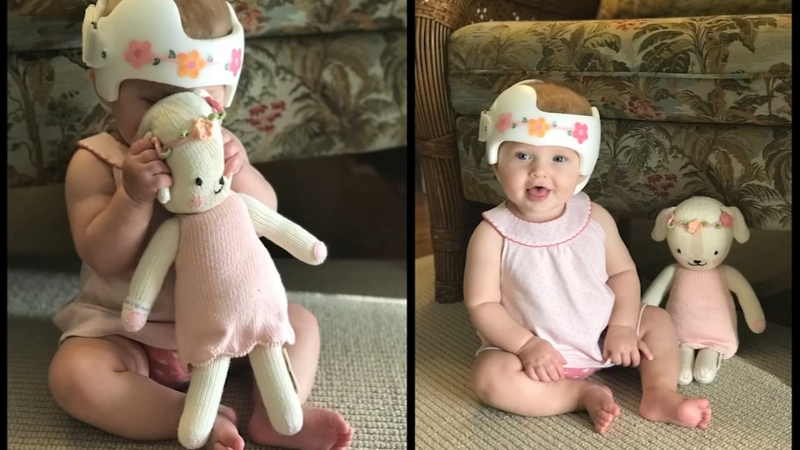 GARNER, N.C. (WTVD) -- A Wake County mom is using her skills to help lighten the mood for parents of infants facing an unexpected diagnosis.

ABC11 was there at Precision Signs in Garner when Megan Vincent and her 9-month-old son, Asher, arrived to pick up his freshly-wrapped cranial orthotic.

"It's adorable...the design and everything," said Vincent, studying the bright red helmet with "Asher" written across the forehead in bold lettering.

The DOC band, which provides custom corrective pressure to redirect a baby's natural head growth, was provided by Cranial Technologies.

The company, with clinics all over the country, diagnoses and treats plagiocephaly, more commonly known as flat head syndrome.

The band, worn 23 hours a day for several weeks as prescribed by a clinician, becomes a big piece of a child's life, albeit for a brief period of time.

It can be a difficult diagnosis at first.

"A little reluctant in the beginning," said Vincent. "But it's really improved his head in the three weeks we've had it so far."

"A lot of parents come to me and say, 'we're kind of devastated that we have to deal with this, and this is one little way that we could help to make it a little bit easier,'" said Chelsea Lindsey, graphic designer and wrap installer with Precision Signs.

Late last year, Lindsey got a call from a mom asking if her family's business could wrap her child's DOC band.

"I thought, if I can wrap a vehicle I'm sure I can figure out how to wrap a helmet," she said.

Not knowing what a cranial orthotic was, Lindsey downloaded a free template online, picked up a sample band at Cranial Technologies and spent a month practicing different methods until she found one that wouldn't peel up.

"We started getting phone calls and emails everybody wanted one and it was like we had to really see - because we only wanted to offer this as a free service," she said. "We couldn't see charging for this."

Ever since, Lindsey has wrapped two helmets a week, for free.

Because the DOC band needs to be worn consistently for the treatment to be effective, time is of the essence.

Lindsey takes about 90 minutes to complete each wrap.

"They're all their own unique little art pieces and I really love that because it speaks to each family individually," she said. "I love the feedback that we get from the families afterward who say that we've made such a difference in this journey that they've had to go on that they weren't anticipating. It's really cool to be a part of that."

Cranial Technologies has treated 175,000 babies over the past 35 years.

The company said more babies are being diagnosed following the American Academy of Pediatrics' introduction of its Back to Sleep campaign in the 1990s.

Citing the AAP's statistics that putting infants to sleep on their backs has successfully reduced Sudden Infant Death Syndrome (SIDS) by more than half, there is a correlation between back-sleeping and plagiocephaly.

Other causes besides supine sleep position are convenience devices, torticollis, in-utero constraint, and prematurity, said a spokesperson for Cranial Technologies.