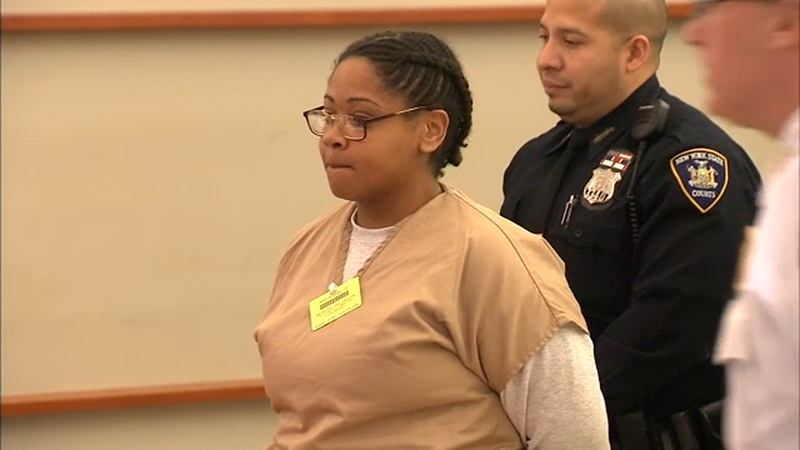 WAKEFIELD, Bronx -- A Bronx woman who killed her pregnant friend and cut her baby out of her body was sentenced Wednesday to 40 years to life in prison.

Ashleigh Wade was found guilty in October of second-degree murder and kidnapping. She was sentenced to 25 years to life on the murder count and an additional 15 years for the kidnapping charge.

Wade pretended to be pregnant before killing her friend Angelikque Sutton and stealing her baby girl, claiming it was her daughter, back in 2015.

Wade had faked a pregnancy to her boyfriend, family, and on social media, and when Sutton - who was 8 1/2 months pregnant - visited her Wakefield apartment under the guise of picking up a present, police said Wade stabbed Sutton to death. Prosecutors said her throat was slashed so she couldn't scream for help. The major blood vessels in her neck were cut, and she bled out.

Wade then used a paring knife to deliver baby Jenasis, who was present in the courtroom at the sentencing.

During the trial, prosecutors showed jurors bloody photos from inside Wade's apartment and described her as "calculating."

"She took a great deal of care to avoid the abdomen," the prosecutor said. "The defendant needed Ms. Sutton to die, and she needed Jenasis to live."

In her defense, Wade's attorney could only argue that "many of the facts are not in dispute. There could have been something that went horribly wrong in Ashleigh Wade's own mind."

---------------
ABC11 has decided to slowly reduce the number of stories on the website that have a comments section. We believe very strongly that our audience should have an opportunity to discuss and debate events in our world, however, we have not been able to moderate the comments as well as we would like. Instead of hosting a platform that could allow a few loud and ugly voices to dominate a conversation, we want to encourage everyone to join us on our social media platforms and speak out there. Facebook: facebook.com/ABC11 Twitter: twitter.com/ABC11_WTVD
Report a correction or typo
Related topics:
wakefieldnew york citybronxmurderbabystabbingpregnant woman
Copyright © 2022 WABC-TV. All Rights Reserved.
RELATED
TOP STORIES
Clayton police arrest man in shooting that injured 1
Biden: US would intervene with military to defend Taiwan
Wake County begins giving COVID booster shots for children ages 5-11
Biden: Monkeypox threat doesn't rise to level of COVID-19
Pfizer: COVID vaccine for kids 6 months to 5 years old 80% effective
Texas woman sought in fatal shooting of pro cyclist: US Marshals
Zibanejad leads Rangers to 3-1 win over Hurricanes in Game 3
Show More
Russian sentenced to life in Ukraine's 1st war crimes trial
1 person in hospital after a pedestrian was hit crossing I-95
Event for Ukraine raises money for paramedics on frontlines
78,000 pounds of infant formula arrives in US
Barber attempts to cut concerns about violence in Durham
More TOP STORIES News