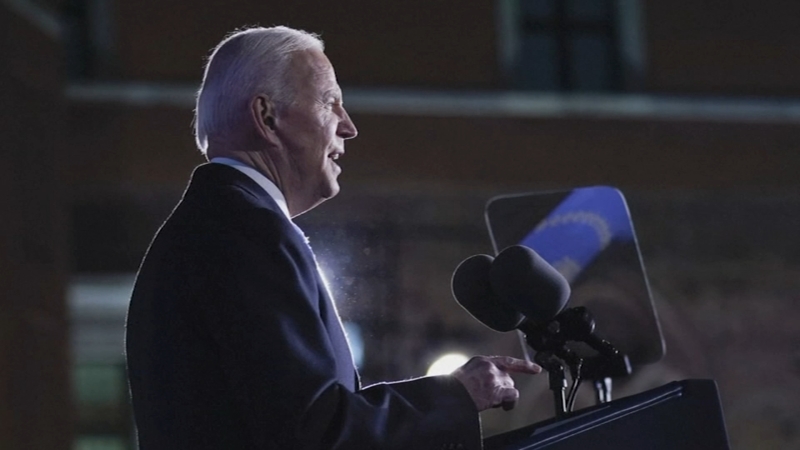 In a speech in Warsaw capping off his trip to Poland Saturday, President Joe Biden made pointed remarks against Russian President Vladimir Putin.

"A dictator bent on rebuilding an empire will never erase a people's love for liberty. Brutality will never grind down their will to be free. Ukraine will never be a victory for Russia," said Biden.

The comments which drew the most attention came near the end of his address.

Shortly after, the White House clarified the remarks, saying the president was not referring to regime change in Russia but to Putin exercising power in other countries.

"It's like letting the genie out of the bottle. He said it. He said it. And he knew exactly what he was doing. And it was a message to the Russian people as well as to the other constituencies that were in his speech," said Dr. Don Raleigh, a UNC History Professor who specializes in Russian history.

Biden's speech, delivered in a city that was damaged and targeted during World War II, featured the president referring to several historical events and leaders.

"He mentions Eastern Europe, the Soviet invasions of Eastern Europe - Hungary, Czechoslovakia, and the non-invasions but threatened invasions of Poland in 1956, and again in 1981. It's a message to NATO and western Europe, (that this is) the biggest threat in the continent since 1945. And then he says it's really a threat to all the democracies in the world. This is an existential threat between autocracy and democracy and freedom," said Raleigh.

The speech delivered the same day that Russia attacked Lviv, a city about 50 miles from Poland's border.

"Don't even think about moving onto one single inch of NATO territory," said Biden.

"What he was saying is this defensive alliance, it's a sacred alliance. And we will defend our turf. And saying it in Poland I think was reassuring, I think for all the Eastern European countries, and particularly the Baltic states as well, who feel very threatened right now," Raleigh explained.

"The key factor is will the West give the Ukrainians the necessary arms to be able to sustain this battle. We see what they can do when they have the right arms," said Wolowyna.

"If he's not stopped now in Ukraine, he eventually will continue attacking one way or the other. I think European countries are beginning to understand that, slowly," Wolowyna explained.

During a meeting with US service members Friday, Biden referred to Putin as a "war criminal."