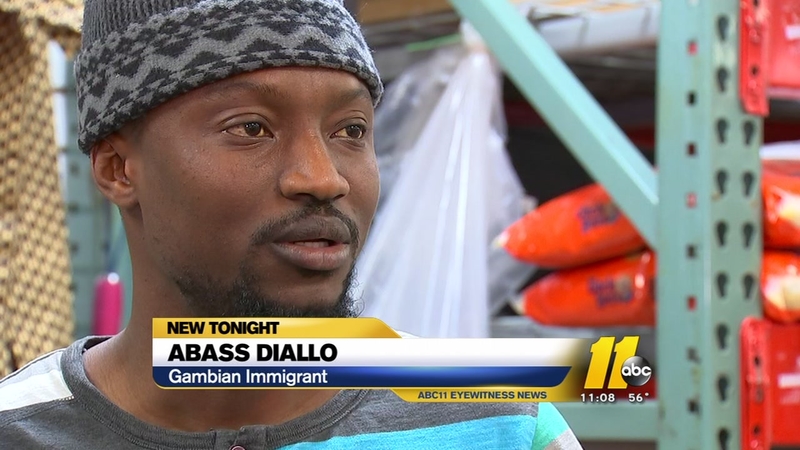 RALEIGH, NC (WTVD) -- President Donald Trump spent Thursday night making a flurry of phone calls to friends and advisers - denying he was racist but defending his disparaging comments about Haitians and African countries - as something many people think, but won't say.

Friday night in Raleigh, African immigrants had plenty to say about the president.

What the president reportedly said about Africa in a White House meeting stills stings at Diallo's store. Diallo emigrated to the U.S. from Gambia as a teen.

The president ignored reporters' questions about the alleged vulgarity behind closed door with senators. He's said to have questioned why the US would accept more immigrants from Haiti and "s---hole countries" in Africa.

On Friday morning, Trump tweeted that his "language was tough" but "this was not the language used."

Illinois Democratic Sen. Dick Durbin, the only Democrat in the meeting, said the president indeed used those words. Durbin called the moment, "heartbreaking."

"He said those hate-filled words. And he said them repeatedly," Durbin told reporters Friday.

"Oh, I feel bad," said Barhanyu Brhe who immigrated to Raleigh from Ethiopia in 2010 and now manages Abyssinia Ethiopian Restaurant near NC State.

"He's not a good president of America. So I don't believe in him," Brhe told ABC11.

Back at Abass Diallo's African Market, customers called the president's comments insulting. And Diallo had some words of advice for Trump.

"I would tell him before he talks, he needs to think before he says something," he said.

The uproar comes as Republicans and Democrats on Capitol Hill try to hash out a deal on immigration policy and protecting the so-called "Dreamers" - young immigrants brought into the country illegally by their parents.