'Uncomfortable:' Reaction to Greenville Trump rally pours in from across NC 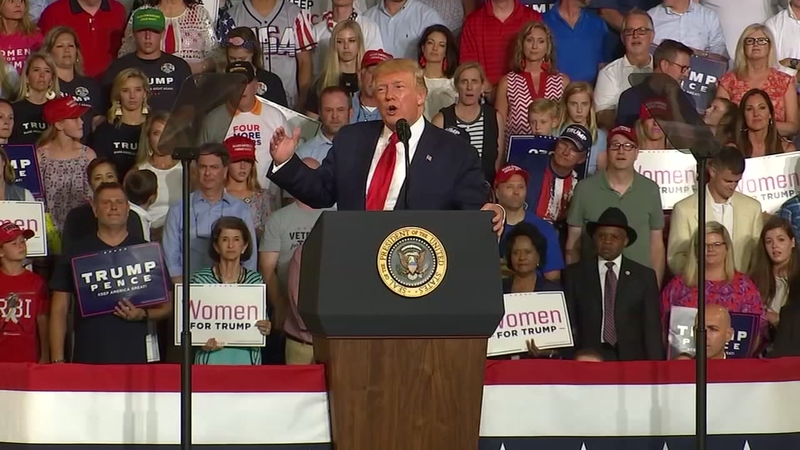 Some eyebrows raised after 'Send her back' chants at Trump rally

President Donald Trump spoke for 91 minutes Wednesday night, but on Thursday it was the thousands in attendance -- not just Trump -- under fire.

The "she" is Congresswoman Ilhan Omar, a Minnesota Democrat known for her own inflammatory and sometimes anti-Semitic rhetoric.

Omar, a progressive Democrat who moved to the U.S. as a refugee from Somalia, was criticized by Trump along with her progressive colleagues Rep. Alexandria Ocasio-Cortez, D-NY, Rep. Ayanna Pressley, D-MA, and Rep. Rashida Tlaib, D-MI.

"The man seated in the powerful seat in D.C. can be a catalyst for a great change needed in this country or he could be one who is causing a lot of explosive things to happen," Spearman added. "That seems to be what he's choosing to do."

Leah Byers, a policy analyst for the conservative Civitas Institute, was among the roughly 8,000 in attendance at the Keep America Great rally in Greenville.

"You could feel sort of the individuals participating and the ones uncomfortable and looking around," Byers said of the moment the "Send her back" chant started. "I think Omar's comments rightly stir some sense of frustration among many hardworking Americans. You see the reaction to that can also be frustrating to many Americans who do not share the sentiments of you shouldn't be in this country if you disagree with me. A majority of Americans and a majority of North Carolinians would be uncomfortable with both sides."

Trump's next rally is August 1 in Cincinnati. Sources told ABC11 that the President's campaign team may return to North Carolina later this summer for an event in Charlotte. If and when that happens, Byers hopes both Trump and his supporters tone down the rhetoric.