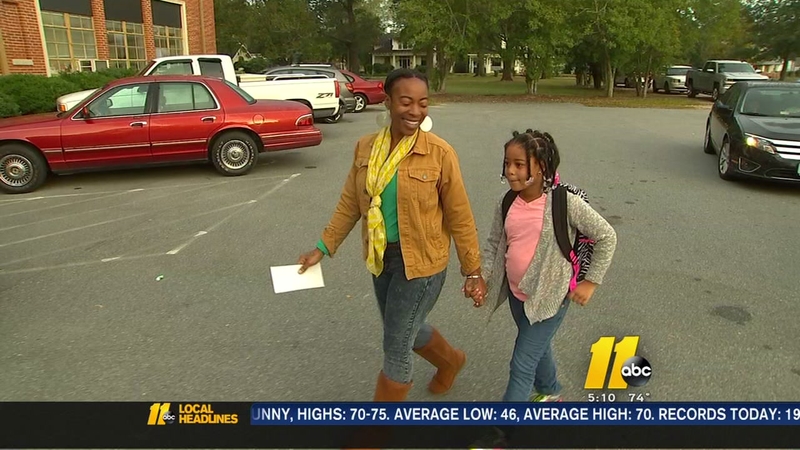 PRINCEVILLE (WTVD) -- Children from the Edgecombe County town of Princeville have not only been living in shelters and hotels for the past two-and-a-half weeks, they've also been out of school.

Thursday, they returned to class for the first time since Hurricane Matthew flooded their town. They were greeted with a welcoming party to a refitted former school in neighboring Tarboro.

School officials say it could take up to two years to repair the damage at Princeville Elementary school two miles from the new temporary school.

Princeville Elementary principal Annette Walker greeted students as they got off the bus and out of cars.

"They're back. They're happy. They're safe," the third year principal said.

She added, "And now we're going to try to help them put their lives back together again. Before this they were displaced and it was hard to put our hands on them. But now we can have a part in making sure that our children are taken care of. And we can assist their parents."

But while the students have a lot of learning to catch up their principal said today is all about their emotional health. Additional counselors were on hand to answer questions, especially for those students who have lost their homes.

Latasha Wilkins considers her family lucky. When they were allowed back into Princeville this week they found out their home was spared.

But after weeks of living in temporary quarters, her daughter, a seven-year old first grader, has a lot of anxiety about it all.

She said, however, she's confident the staff at Princeville Elementary can help get things back to normal.

"I think it will be okay. The teachers will make her feel at home."