After floods, Princeville fire dept. in need of rescue 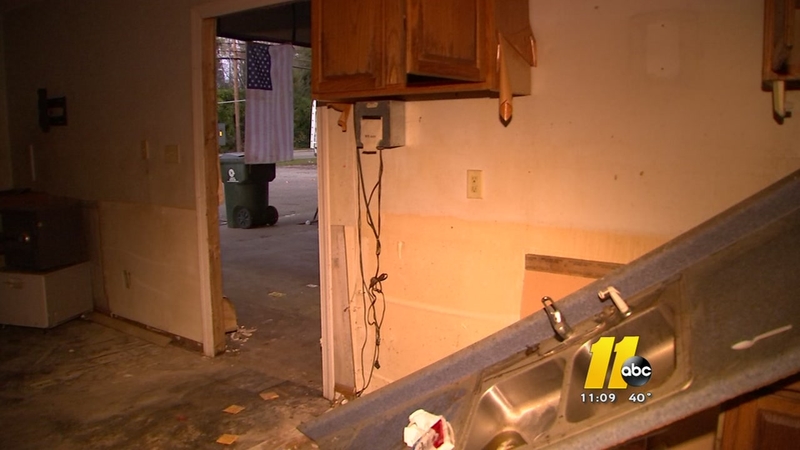 PRINCEVILLE (WTVD) -- The Town of Princeville was hit hard after Hurricane Matthew. Chief Keith Powell of the volunteer fire department almost lost his life during a water rescue.

Powell had asked his fellow firefighters to tie a rope around him so he could head into the water to help a woman get out of a car that was surrounded by floodwater. When he reached the car, it went under water, taking him down with it.

He doesn't remember being pulled out of the water. He said he lost consciousness, but he was grateful to find out that other firefighters were also able to save that woman from her car.

Now he's working to save his fire department.

Princeville firefighters are working out of a tent behind the ruined building.

"I was here 17 years ago when the first flood happened and I just got into the fire department and to see the department be destroyed again, within my career, is just overwhelming," Powell said.

He said that for days they could only reach the fire house on Mutual Boulevard by boat. It was nearly swallowed by the water. When the flood finally receded, he couldn't believe what they found.

Water had turned supplies into debris. Computers were destroyed and all the paper copy of their records were drenched. The chief has since laid everything out on the fire house floor hoping to dry out all the paperwork.

"This is the life and blood of our fire department, the records," said the chief, "I have to prove to the state that my guys are competent with training, training hours, my financial records."

Three of the fire trucks they had been using through the floodwaters are damaged beyond repair. The two they still have are at risk of going the same route if they don't find a garage to put them in before it gets too cold outside.

Firefighter equipment has mold after being drenched in floodwaters.

"You've got to maintain a certain temperature because the trucks will freeze, pipes will bust and it's going to cause more damage to the trucks," the chief explained.

They can't even use the gear they normally wear because it's moldy from all the water.

Right now, they're working out of a tent behind the fire house, a makeshift office. They take turns sleeping in there to watch over the little bit that they do have and while firefighters are doing this, they're also dealing with having lost everything at home as well.

Fearing the process for relief funding from the government will take too long, Powell started a GoFundMe page, hoping to raise $850,000.

WANT TO HELP? CLICK HERE TO DONATE TO THE GOFUNDME CAMPAIGN

He said the cost of one fire truck can run up to half a million dollars.

As far as flood insurance, Powell said they don't know whether the fire house, the town has coverage. At last check, he has not been able to have a conversation with the mayor about what, if any, money will be used to rebuild.

"The claim has been filed with our insurance. The Town has the insurance to cover the rebuilding of the building only," said Town Manager Daniel B. Gerald.

Powell said ideally, he would like to find another area, out of the flood zone, to rebuild and still serve the community.

"FEMA said its program to help first responders, such as the fire department, is just getting started. FEMA officials said several briefings for local officials are underway," Gerald told ABC11. "The Town is working with both FEMA and its insurance to reestablish the Town owned Fire Station Building. Currently the station is being abated for damages and this will be an ongoing process we hope to have remediated as soon as possible."

As far as a new location for the volunteer fire department, Gerald said the Town does not have a role in securing that.