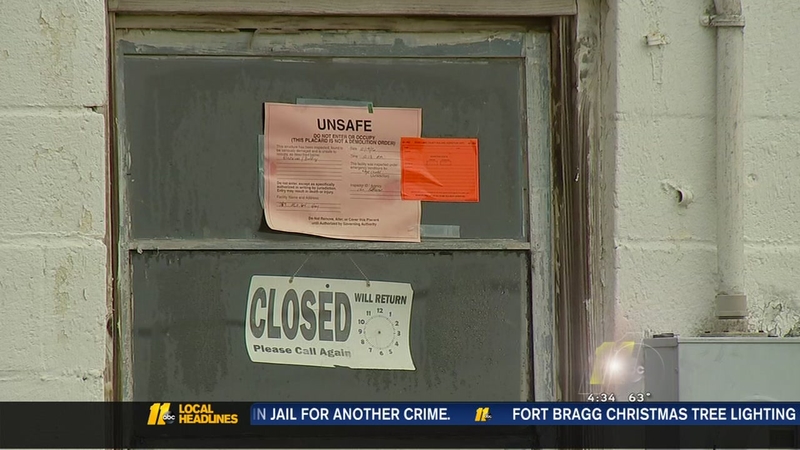 Princeville residents torn over whether to take buyouts

PRINCEVILLE (WTVD) -- The town of Princeville is holding a public hearing Thursday night to inform residents about a buyout option offered by FEMA. The hazard mitigation meeting is taking place at 7 pm at the Tarboro High School gym.

Town manager Daniel Gerald explained the options as the following:

Gerald said the board of commissioners can vote on one or more of these options.

Residents seem to be divided about the future of their property.

Hurricane Matthew's rain water reached the top of the windows of the home that Angela Mallory-Pitt shared with her husband, Elvis Pitt.

Their refrigerator ended up sideways and their ceiling fans moldy. Old photos were destroyed. She said they stayed at a hotel for 17 days and are now staying with her mother.

"It's kind of hard to see everything you worked for on the side of the road," Mallory-Pitt said. "I think of the memories that were there that are gone."

The memories of so many of Princeville's more than 2,100 residents also washed away. Gerald said 241 homes had substantial damage and 229 had moderate damage.

The Town of Princeville passed a resolution Monday to allow FEMA trailers in the town for 18 months. This is being done to repopulate the town while homes are repaired after flooding, said Town Manager Daniel Gerald.

The Princeville Fire Department is made up of volunteer firefighters and they are now operating out of a tent since their building flooded.

It felt like a rerun for many, who were around in 1999 when Princeville was flooded by Hurricane Floyd. The town decided against federal buyouts then but Mallory-Pitt said she's interested in a buyout now.

"This is two times in 16-17 years," Mallory-Pitt said. "It's hard to keep replacing property and some things can never be replaced and I think it's best for me and my family. I think it may be best for us to go."

But not everyone is buying into the buyout.

The town was founded by freed slaves in 1885 and some worry its history will be lost.

"This town was forged, probably in blood, sweat and tears," Gerald said, and he added that predecessors fought for a dike he says still needs federal funding to be completed.

He also said the buyout may not be in the best interest of all residents. He said funds would cover remaining debt on homes first and that residents who are in debt can lose money.

Jimmie Hilliard agrees residents should stay in Princeville and says he opposes a buyout.

The repairs are already underway at Hilliard's home. More than 2 feet of water gushed into his house, destroying everything inside. Still, he says he's staying put.

"I had all my stuff paid for and I don't feel like kick-starting over," Hilliard said. "I started over one time."

But Mallory-Pitt says she's not willing to take that chance again.

"When I left this time, I stepped out in water above my ankles," Mallory-Pitt said. "I don't want it to be that we can't get out the next time."

Mallory-Pitt said she's afraid lives could be lost if the town flooded again. She said all options should be put on the table for residents to decide.

"I really feel that the town officials should listen to the voices of the people. We elected them and they should be our voice."

For the full flood report about Princeville, click here (.pdf)