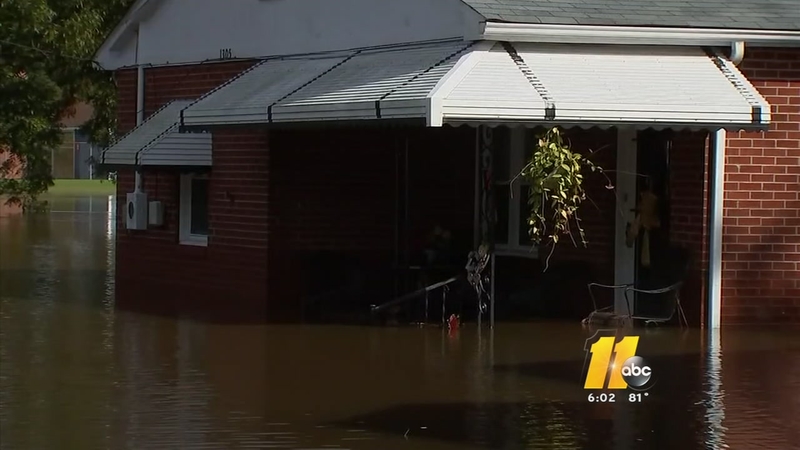 PRINCEVILLE, N.C. (WTVD) -- For the first time since Hurricane Matthew, town leaders walked back into flood-ravaged Princeville, a town founded and built by freed slaves in the 1800s.

They walked hand-in-hand as a sign of solidarity and commitment to rebuild.

The group is back to see what the floodwaters did to their community - after the entire town of 2,200 evacuated last week.

"We went out together, we're coming back in together, and we're ready to work," said Linda Joyner, Mayor Pro-Tem of Princeville.

The town is soggy and dirty after 80 percent of it was under 10 feet of water.

Princeville, NC looks a lot dryer. Still no timetable yet on when neighbors can return. #AfterMatthew pic.twitter.com/NWBjxEqvg0

The water is now receded thanks to members of the US National Guard, who spent seven days draining nearly 80 million gallons of water out of Princeville.

With the town nearly dry, Mayor Bobbie Jones said he is making preparations for neighbors to come back.

Town Hall in Princeville, NC was under water. Look at the columns and you can see the water line. #AfterMatthew #ABC11 pic.twitter.com/Ckij3vSEN3

"Even though the water is gone, there is still danger we have to address before our citizens can return," Jones said.

But there is no timetable on when that will happen. However, there is a plan on the table to keep floodwater out of Princeville.

Mayor of Princeville thanks national guard for draining the town of flood water #aftermatthew pic.twitter.com/68fF39UhW2

Officials say since Hurricane Floyd hit the town 17 years ago, and residents turned down the federal government's buyout to move, the Army Corp of Engineers has designed a plan to make the levees higher and wider, so that water does not spill over and around the levees. But the process to approve the $22 million plan is being held up in Washington.

"It's with US Congress and waiting on two things: for it to be authorized and number two for there to be money appropriated to it," said Eric Evans, manager for Emergency Services in Edgecombe County.

Until then, town leaders are asking Princeville residents to be patient.

"Trust us," Joyner said to neighbors. "Because there is a light at the end of the tunnel."

Part of the town cleanup involves getting Princeville Elementary operable. Leaders say 300 students will be moved to Bridgers, a family resource center in Tarboro to continue their school year.