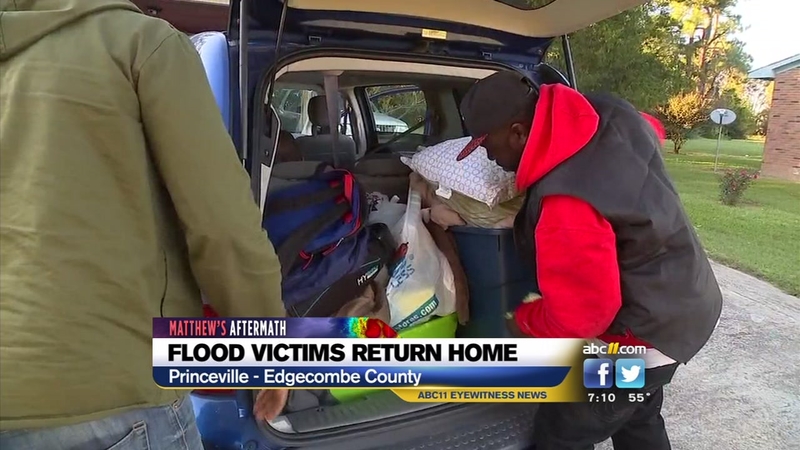 PRINCEVILLE, N.C. (WTVD) -- Sewage, gas and electrical issues still have to be addressed in most of Princeville. Only a quarter of the towns 2200 residents are back because officials say they were the least impacted by the aftermath of Hurricane Matthew.

Saturday, Darryl Jones moved some of his things out of his old home in Princeville to his new home in Pinetops. He can now finish his move. Jones' Southern Terrace neighborhood in Princeville was spared from the flooding.

For the first time in two weeks Darryl and his family were able to return after evacuating. 17 years ago his family had to evacuate from Hurricane Floyd.

"For it to happen twice like this and so soon, it's damaging and mentally draining," Jones said.

Eighty percent of the historically black town, founded by freed slaves, was under water -- up to 10 feet in some parts. But this is not everyone's story.

Saturday, Irene Stephens returned back to her home of 28 years to find it untouched.

"You know, that makes you feel bad. You're glad to return for yourself, but you feel bad for those that couldn't return," Stephens said.

Neighbors here qualify for FEMA, assistance they know too well from the devastating effects from Hurricane Floyd. This community is living their nightmare all over again.

The project would make them taller and longer, and hopefully reduce the risk of another flood disaster.

Bobbie Jones, the mayor of Princeville says he is not able to return home yet. Jones estimates that half of the residents could return Monday, and the rest by Wednesday.

Town of Princeville will hold a meeting Monday, Oct. 24 at 7:00 p.m. at the Edgecombe County Administration Building.