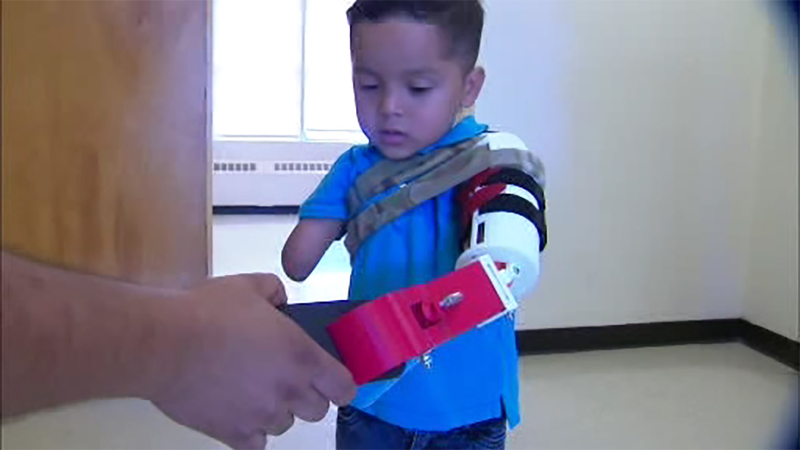 NEW YORK -- A young boy's life has been dramatically changed thanks to a new prosthetic that was 3-D printed at Jacobi Medical Center in New York City.

Now, 3-year-old Isaac Cruz could be making history with his new arm.

Cruz can do a lot even without hands, but thanks to the efforts of a pioneering doctor, he may be the youngest person to make use of a 3-D printed prosthetic.

"I was happy he got it, because he could do more on his own," his mother said. "He can grab stuff, water bottles, a telephone."

Isaac's arms stopped growing in utero, while his twin sister's developed normally. Typically, someone like Isaac will use his or her feet to do many tasks, but that can negatively impact the spine. A prosthetic alleviates that, but most are very expensive and often aren't fitted for children who grow so quickly.

That's why Dr. Cesar Colasante thought a 3-D printed prosthetic could do the trick. He used a printer that Jacobi had received through a grant, making the arm for the cost of about $100.

"Having them use early prosthetics that are cheaper, that are basically disposable, you break it, great, we make another one, no big deal," he said. "It allows them to practice a lot more and be more comfortable with the prosthetic."

So far, Dr. Colasante has created about 20 3-D printed prosthetics, including thumb splints, hands, a helmet, and even the handlebar attachments for Isaac's bike.

They provide freedom for Isaac to ride like the wind.

"The wishes of a father are to see his son interact with other kids, that he can create relationships with others," Isaac's dad said. "I'm happy for that gift."

Dr. Colasante has since switched his focus from plastic surgery and burns to rehab, and in many ways, fitting Isaac with his hand has been also been a gift for the doctor.