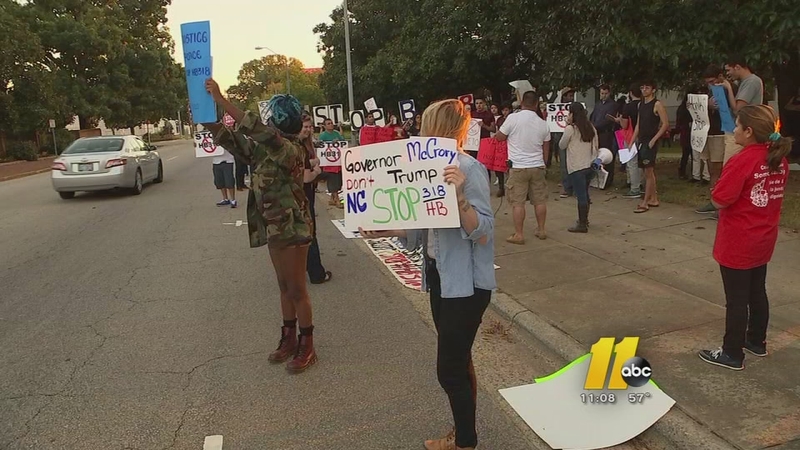 The groups have been protesting for days in an attempt to convince McCrory to veto the bill.

"I'm extremely frustrated and angry knowing a lot of people in my community are effected in such heinous and such xenophobic and racist legislation," offered protestor Yerson Padilla.

Passed two weeks ago by the General Assembly, House Bill 318 bans local law enforcement from accepting consular ID cards. For thousands of undocumented immigrants, it's the only ID they have. A traffic stop could mean deportation.

Governor McCrory has all but promised to sign the bill - celebrating parts of the measure that ban so-called sanctuary cities which are local governments that protect undocumented immigrants.

And the Republican author of the bill insists it's not anti-immigrant. It's anti-criminal.

"We have some 2700 illegal aliens in our jails, now. They've committed murder and they're here, because we allow it," offered Representative George Cleveland (R) Onslow County.

Seventeen years after her mother brought her to the U.S. illegally from Mexico, Tonya Carillo's immigration status is protected, for now, but she's worries how the bill will impact her mom.

"We're all human beings and we should all be treated equal," she said. "My mom came here for a better opportunity for her, for her family and for everybody. She did not come here to hurt anybody."

While Governor McCrory continues to review the bill, the protests are expected to continue every evening outside the governor's mansion. Wednesday, the focus was on college students like Carillo. Thursday, it's local immigrant factory workers and on Friday, faith leaders.