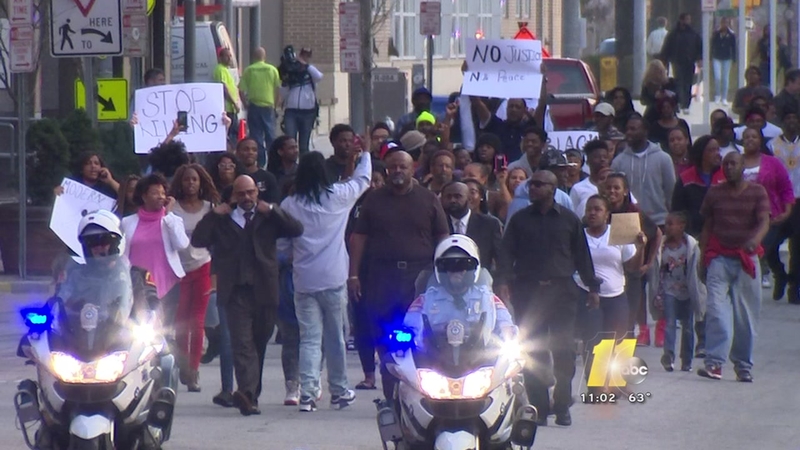 RALEIGH (WTVD) -- They shouted, "Black lives matter!" as they marched Tuesday from southeast Raleigh into downtown, blocking the evening commute while shouting their frustrations.

With their fists in the air standing on the steps of the Wake County Courthouse marchers loudly proclaimed, "We're here!"

"I talked to the mother and that's what she asked me. She said 'bishop, just get someone to tell me why they shot my son,' " said Bishop Darnell Dixon of Raleigh's Bible Way Temple

The march was in response to Monday's shooting of Akiel Rakim Lakeith Denkins, 24, who was fatally shot by a Raleigh police officer who was attempting to serve a warrant on a drug charge.

With a police escort leading the way, the protesters marched to downtown Raleigh and gathered outside the Wake County Courthouse briefly before continuing the march through downtown, turning the corner to Fayetteville Street. They later walked back to the southeast Raleigh neighborhood where the deadly shooting happened a day earlier.

Dixon spoke to the crowd downtown.

"This is not a sprint, it's a marathon," Dixon said. "We want the city to know that southeast Raleigh, we are present, and we want order."

"It's very important that we send a message to this city and to this world that we're not going to sit back silently while our people are being shot down while they're running or unarmed," said the Rev. Curtis Gatewood with the North Carolina NAACP.

In just-released tapes of RPD radio traffic during the shooting, the tense moments immediately following the gunfire are heard from a police perspective:

"Shots fired, Bragg Street, back side of the house. We've got a black male unresponsive. 20-year old black male, not conscious and breathing."

The tapes don't answer the community's burning questions: did police see Denkins with a gun? Was he running away when he was shot?

"This is a sprint,Not a marathon..You will hear our voice. We are frustrated." March after officer involved shooting pic.twitter.com/XjsrxZAgZt

"Our goal is to get through this investigation, to make a determination as to what, if anything, happened that might be criminal," said Lorrin Freeman, Wake County district attorney. "And then to hopefully have our community heal. We are lucky here in Wake County to have a strong community and we need the community now joined together as we go through this process."

Still, there was plenty of skepticism among the marchers.

No, I don't (trust them), they're going to plant something in the investigation, act like he shot at a cop, but he didn't," said Darrell Fulton, one of the protesters.

Tuesday night's protests were peaceful. And while there was no permit, Raleigh Police did give demonstrators room to march; careful not to escalate an already tense situation.

Bishop Darnell Dixon tells crowd dead man's criminal record has nothing to do with his killing. #ABC11 pic.twitter.com/cTSp2ervB9

Earlier Tuesday, Raleigh Mayor Nancy McFarlane called for calm while the incident is investigated and all the facts are gathered and evaluated.

"We are committed to ensuring information is shared as it becomes available," McFarlane said. "Please join us in calm, prayer and patience and please keep all of those involved in this tragedy in your thoughts and prayers."