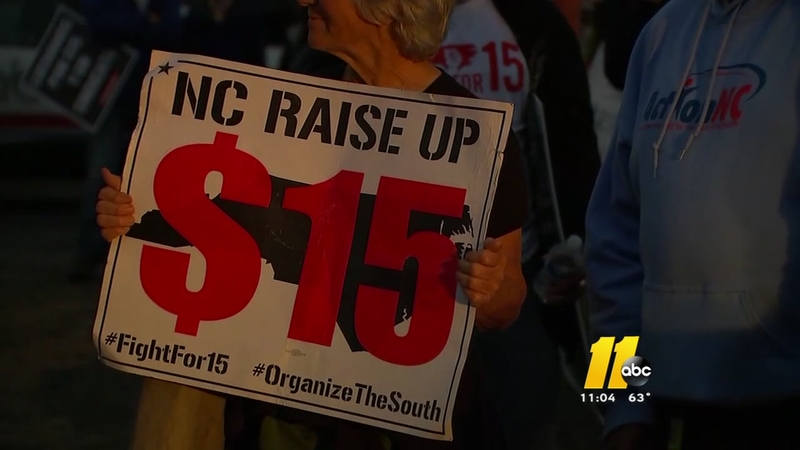 Led by the NC NAACP, demonstrators sat down in the road and chanted. Police in riot gear arrived soon after.

Durham Police told ABC11 that at least 53 people had been arrested near a McDonald's and an Arby's restaurants on N. Roxboro Street. One of the arrests was NC NAACP leader the Rev. William Barber.

Those arrested will be charged with impeding the flow of traffic, a police official said. The number of arrests could still rise as police process those apprehended.

Later Tuesday, Barber got out of jail. He confirmed to ABC11 that the entire group at the jail was waiting to be processed and said the protests were in conjunction with other minimum-wage protests and arrests across the country.

Altha Cravey, one of the protesters arrested, said she is a geography professor at UNC Chapel Hill.

"I believe in the fight for 15, I believe conditions in universities are very similar to conditions in fast food industry and the home health care industry," Cravey said.

NAACP now leading people to sit in the street. This is North Roxboro #abc11 pic.twitter.com/aTVSv4RZhi

Earlier in the day, dozens of Triangle residents spent Tuesday night marching instead of working, some only making the minimum wage.

There were a series of rallies held throughout the Triangle. The protests are taking place across the country.

A small crowd gathered outside the governor's mansion urging Gov. Pat McCrory to make a change.

Demonstrators brought a megaphone and chanted, "If we don't get it, shut it down."

Hilda Edmundson helped lead the charge. She is a home health care worker and makes $9 an hour. At 52-years-old, she can't afford her own place and often lived with her clients.

Protesters want minimum wage to be increased to $15 an hour

Conservatives believe such an increase could ruin our economy.

The John Locke Foundation, a nonprofit think tank, did a study recently and estimates the move could cost the state more than 330,000 jobs.

Workers think the increase will offer a better way of life.

"We have plenty of hard working individuals who try to take care of their families," said Edmundson.