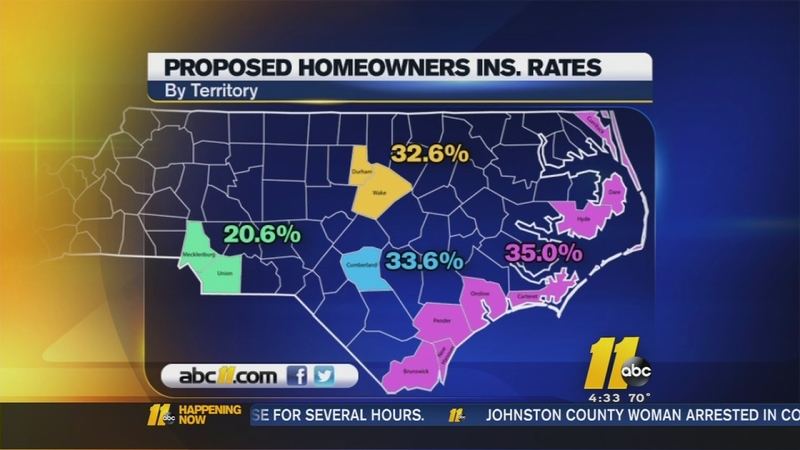 RALEIGH (WTVD) -- A public hearing that began in Raleigh Monday could bring a massive jump in the price of insurance for homeowners across North Carolina.

Insurance companies have requested an overall statewide average increase by an average of more than 25-percent in January.

The proposed increases range from as low as 3-percent in some areas to 32-percent in the Triangle.

Click here for the proposed rate increases by region(.pdf)

Experts from the North Carolina Rate Bureau -- which represents insurance companies -- and the Department of Insurance presented their cases to Insurance Commissioner Wayne Goodwin at a packed meeting Monday morning that could go on for several days.

"We believe we are entitled, as the insurance industry, to a rate that is not discriminatory, not excessive and not inadequate. What we're trying to do is make certain that the base premium is appropriate in the state," said Ray Evans with the NC Rate Bureau.

Evans also explained why the proposed increases in Wake and Durham are over 30-percent.

"Because losses that are presented and have been paid in Durham and Wake counties suggest, and we believe, that the rates should be raised that much. The losses exceed the premiums by a substantial amount, and that's the only reason," he said.

"With this increase, if it goes through, we're looking at six times higher. I think all of us at the coast expect to pay more for homeowners insurance but not five or six times higher," said Emerald Isle Town Manager Frank Rush.

Goodwin ordered the hearing because he says the proposed rates appear to be excessive and unfairly discriminatory.

North Carolina homeowners saw an average 7-percent increase a year ago, but companies said they need more after last winter's ice storm where thousands of homes were damaged across the state.

The hearing is open to the public, but there won't be an opportunity for comment at the hearing. Back in January during a public comment period that lasted nearly a month, the Department of Insurance got more than 10,000 comments via postal mail and e-mail. The Department also heard from 25 people in person at a public comment session.

A final decision is not expected until January.