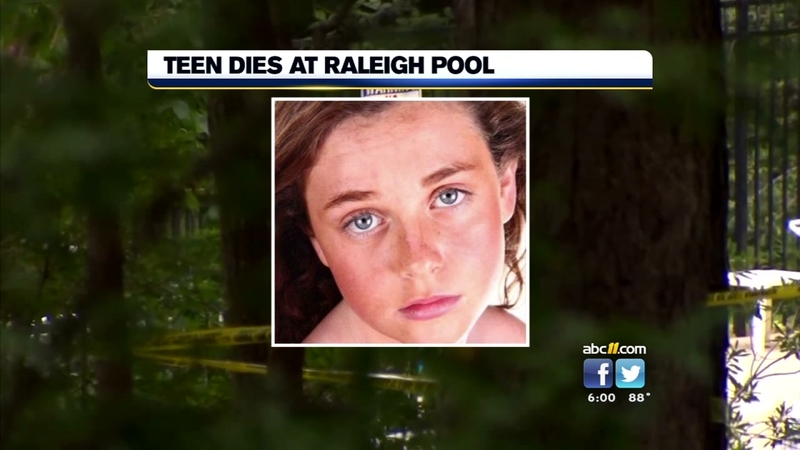 Investigators back on scene in Raleigh where teen died in pool

RALEIGH (WTVD) -- An investigation into what caused a young lifeguard to be electrocuted and drowned in a neighborhood swimming pool seemed to center around a breaker box attached to the pool clubhouse Tuesday.

A preliminary autopsy released Monday revealed Heritage Point Pool where Rachel Rosoff, 17, died Saturday, had an electric charge and that may have knocked the Enloe High School senior unconscious.

An employee who went to the Heritage Point Pool after Rosoff for the next shift Saturday afternoon called 911 and told the emergency operator: "I just got in for my shift. I can't get into the pool. The water seems to be electrified," the caller explained. "Her cell phone is on the table here, and I can see where she texted someone to ask them a question about how to check something in the pool."

The caller said the lifeguard was floating face down in the water.

The Wake County Sheriff's Office is still investigating what caused the water to become electrified.

A large group of investigators, inspectors, and others crowded around the breaker box attached to the side of the pool clubhouse. One man removed the outer panel to take a closer look at the wiring inside.

One man who has not been identified, could be overheard saying, "Yeah, I'm scared to death. I've got somebody's- somebody's life on my hands."

ABC11 went to the experts at Raleigh's Rising Sun Pools who explained only new pools have to meet electrical code and pass bonding inspections.

"After that it's done, the opening inspections and the things that the county does before pools are opened, doesn't have anything to do with electricity because the electricals all underneath the concrete," said Tara Onthank, Rising Sun Pools owner. "Everything's buried."

TIPS FOR ELECTRICAL SAFETY AROUND POOLS AND HOT TUBS (.pdf)

Onthank said even some renovation work doesn't require permits or new inspections to see whether electrical wiring was impacted.

Wake County inspections records show over the last two years, Heritage Point Pool received 8 demerits, all in 2015, for things such as trip hazards and improper storing of chemicals and equipment. The county does not regulate electrical components.

The North Carolina Occupational Safety and Health Division opened its own investigation to determine whether safety and health standards were violated.

OSH said Aquatic Management Group is the employer in the case. The company has declined to comment further than a prepared statement released Monday:

We are shaken by the loss of such a vibrant young life. Our deepest sympathy is extended to the family in this time of unfathomable grief. We are cooperating with investigators in every possible way and are hopeful that the investigation may provide an explanation for this tragedy.