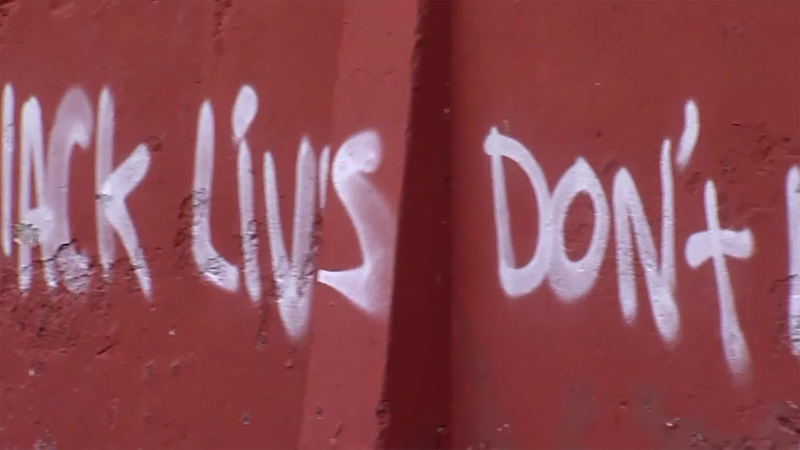 DURHAM (WTVD) -- JC's Kitchen has been a staple in Durham for 25 years. First as Lee's Kitchen and during the past few years with its current name. Now it's in the spotlight because of some graffiti sprayed on one of its parking lot walls.

Last week, owner Phyllis Terry came to work the morning after the election to find the words, "black lives don't matter and neither does your votes" spray painted outside of her business.

"I was shocked," said Terry.

The JC in JC's Kitchen stands for Jesus Christ.

Before she went back to the family business, she spent years overseas doing missionary work. And when she closes up the restaurant for the day, she spends the night on the phone with people overseas continuing that work.

So for Terry, it takes more than mean-spirited graffiti to get to her.

"The best thing is that they wrote on the wrong wall and gave the mic to the wrong person," said Terry.

When the news spread of what happened, Terry said she started getting calls and visitors from people all over Durham and North Carolina. She said people of all religions have been coming into her restaurant to show support.

Thursday night, nine pastors in Durham gathered to host a prayer service at the wall.

"What was on this wall is not going to stand," said Pastor Mac Bare of Dayspring Fellowship, one of the nine pastors.

Phyllis Terry joins in the prayers after the graffiti was removed from the wall.

"We bind and rebuke racism in the city of Durham in the name of the Lord Jesus Christ," prayed Pastor Gene Rentrope of Christian Revival Church.

Thursday night wasn't the first time people have gathered in Terry's parking lot to pray about what happened.

Out of one of the gatherings she said someone suggested a mural be painted where the graffiti has since been cleaned up. This is an idea Terry loved, since on the other side of JC's Kitchen, facing Fayetteville Street, is a mural of her late sister, Sheilah Lee.

WANT TO HELP WITH PLANS FOR A NEW MURAL? CLICK HERE

Terry has even gotten a call from someone with Boys and Girls Club out of California wanting to help with the mural. Planning for the project is still underway, but Terry says she already knows what she'll serve the day it's painted.

"I'm planning on serving lemonade because this was thought to be a lemon but we've made lemonade," Terry said.