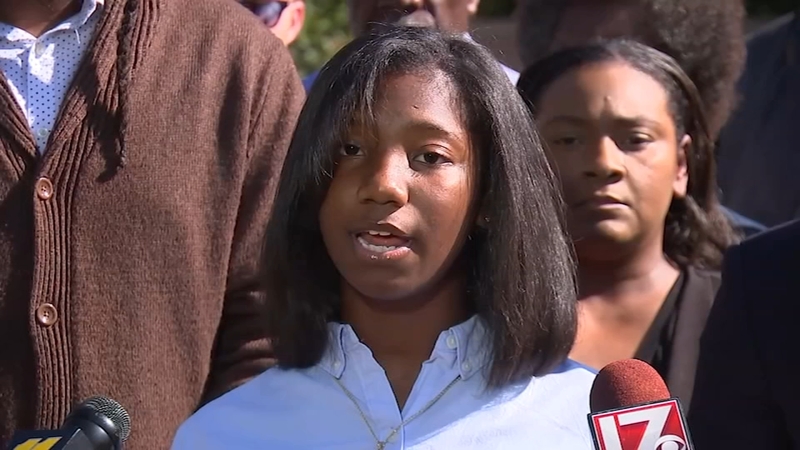 "I believed that my school would take the right actions towards this. But it was evident they did not," she told a crowd of reporters and supporters.

Two weeks after the 14-year old first-year student at East Wake High posed as a white student to gain access to her classmates' racist online group chat, then exposed it on ABC 11, Cenayia and her mom and dad say nothing's been done to punish the students who did it.

"This is a threat to a whole community of people, not just one person," said Corderro Edwards, Cenayia's father. "For Wake County to not move and take action on this is not acceptable. We will not accept it."

The chat included messages like, 'Pullin' triggers and shootin' n------' and 'kill n----- babies.' One person wrote, '#bring slavery back.' Another asked whether their screen name should be 'black slayer'.

One person replied with a cartoon meme of a penguin with a gun along with the words, "shut up n-----' after Cenayia called out her classmates for the racist talk.

"The terms that were stated, the things that were said, that's hatred. That's from deep down," said Cecelia Edwards, Cenayia's mother.

Since our story aired last Friday, the principal of East Wake High School, Stacey Alston, sent a letter home to parents. And also posted a video online Thursday promising to start a meaningful dialogue among students about race relations.

"This lack of leadership only adds validation that it's ok to propagate racial rhetoric in his school,"said Kerwin Pittman, executive director of RREPS (Recidivism Reduction Education Program Services).

WCPSS said the district is barred by privacy rules to discuss disciplinary matters.

We also reached out again to Johnston County Schools; several of the students on the chat were students at Corinth Holders High. A spokesman told us five students from Holders were involved and that the principal "immediately investigated, involved parents, and issued consequences."

JCPSS would not reveal what the consequences were. And Cenayia's family and supporters fear the episode is being swept under the rug.

"I forgave one of my (classmates) but made it clear that I wouldn't forget," Cenayia said. "I just want equality and for my life to matter."

Pittman and the family say they also want Principal Alston held accountable for what they think is his failure to act, along with new policies to handle similar incidents.