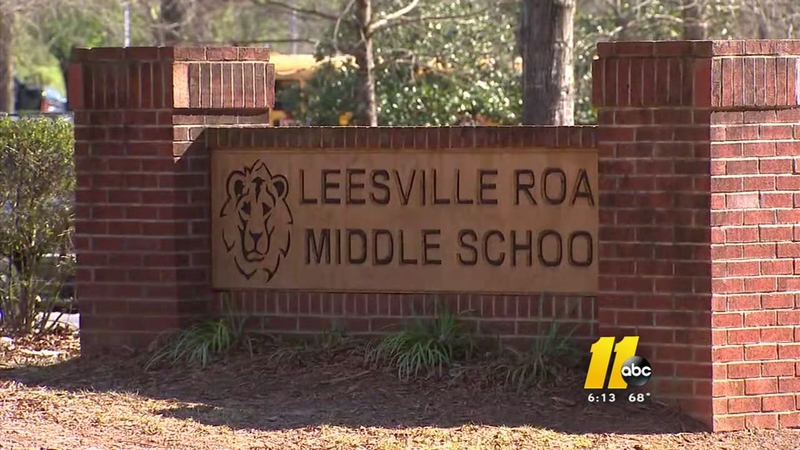 The school district is aware of the video that some Leesville Road Middle School students created and calls it "concerning."

Parents learned about the video in a phone message from the principal here at Leesville Middle. But many haven't seen the video post in which the students use derogatory terms for blacks and Latinos and are heard to say "go back to the fields of Alabama, go back to the factories in Mississippi. You don't deserve freedom."

The hostility expressed in the video extended to Arab and Jewish people as well.

It doesn't appear that Leesville Road Middle School was the setting for the video. Instead it looks like it was shot inside a home.

ABC11 has blurred the students' faces, but those faces are clearly visible in the original Internet video, so school officials say they have identified the students and taken appropriate action.

The principal, Cindy Kremer, sent a phone message to parents saying the video violates student standards and that the video's message will not be condoned in the school.

"Three of our students posted a music video on a music app that was shared with others," she said in the call. "The students' video was a racist rant filled with racist imagery. Not long after the song was posted online, it was removed. Copies continued in circulation."

Kremer goes on to ask parents to talk to students about the importance of living and working together in the community and says the school will do the same.

One parent who we showed the video to was taken aback.

"I'm actually pretty shocked by it. I think that's horrifying," Luann Grochowski, a Leesville Middle parent said. "I mean it's sad to me when kids behave that way especially in the times that we live in now. I think it's really appalling."

Kremer said a number of students and parents expressed concern.

Grochowski said the incident was an indicator that parents and administrators needed to start looking more closely at what's going on inside the schools.

"It reflects a certain type of mindset and character that needs some attention paid to it for sure," Grochowski said.

"It's everyone's responsibility in the community to follow up on stuff like that," she added, "and to make sure we're really talking to our kids and making sure that they are becoming the human beings that we all know and want them to be."