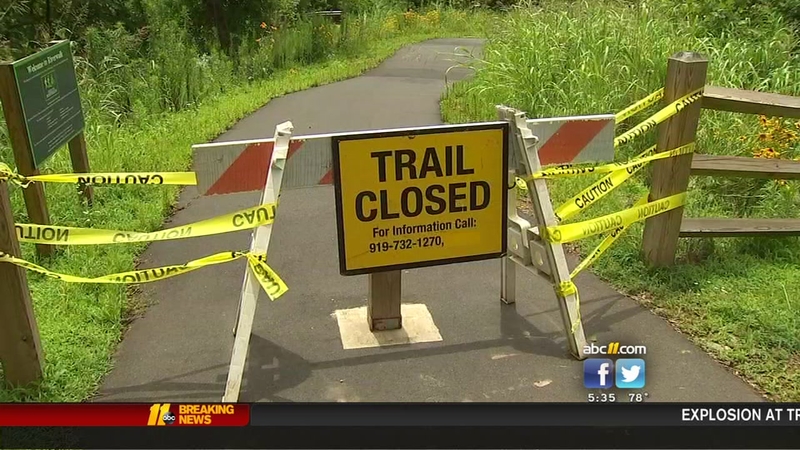 HILLSBOROUGH (WTVD) -- Hillsborough town officials are telling residents to stay away from a popular park and network of trails after heavy rain.

Margaret Hauth, assistant town manager in Hillsborough, confirmed to ABC11 that flooding from the Eno River threatened several parts of the Riverwalk as well as the playground in Gold Park.

Despite some of the water receding, Hauth said the parks and trails will remain closed until crews can clean up the mess.

"Bridges are wood. When they're wet, they're slick," Hauth quipped. "The pavement is wet. When it's got mud on it, it's slick. We don't want anyone falling and hurting themselves."

The storms dumped up to six inches of rain in Hillsborough, according to town officials.

Engineers reported several trees and branches down, but there's more creeping around the area preventing crews from starting their cleanup job.

"That branch may be a snake," Hauth warned. "The snakes have come out and they have a bit of an expanded habitat right now. Until the water goes back and takes (the snakes) with it, it's not the greatest place to be."
Report a correction or typo
Related topics:
hillsboroughfloodinghikingparkhillsborough
Copyright © 2022 WTVD-TV. All Rights Reserved.
TOP STORIES
Snow possible this weekend but major impacts not expected
2 children hospitalized after car crashes into Chapel Hill playground
Fayetteville mother, daughter missing since 2016 found safe
North Carolina Zoo closes aviary after report of bird flu
RDU scrambles to resupply deicer after runway mishap during snow storm
LATEST: Wake County opens 11th drive-through testing site
Saturn's ice moon could support life
Show More
1 killed, 2 injured in overnight car crash
It's official: Supersonic jet startup Boom to land in North Carolina
Man denied heart transplant because he has not received COVID vaccine
Pedestrian killed on Highway 401 in Garner
Minority students, alum react to UNC Affirmative Action case
More TOP STORIES News