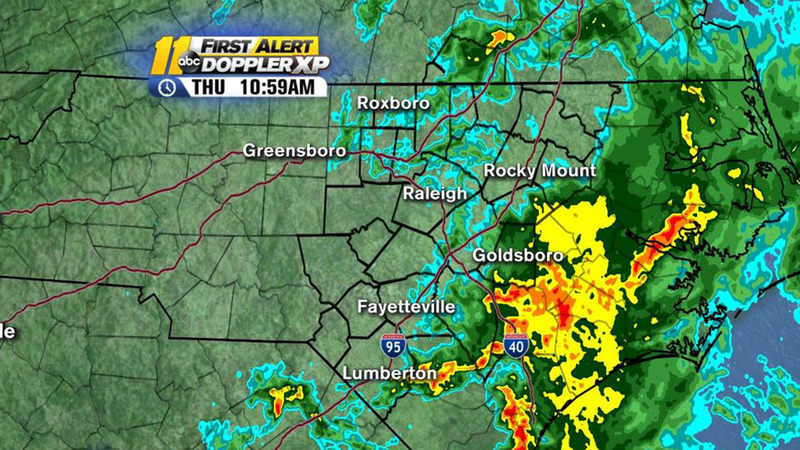 The rain prompted the National Weather Service to issue a flash flood warning for Cumberland County and a flood advisory for much of the ABC11 viewing area.

Flooding was a concern in some areas, partially due to leaves blocking drains.

Around 5 a.m., Raleigh police were called about "standing water" along the westbound lanes of Interstate 440 at Glenwood Avenue. At least five vehicles lost control in the area due to the conditions.

A police officer had to rake leaves from storm drains to help alleviate the problem. At one point, the officer said the water was up to his knees.

The Beltline near Capital Boulevard also had reports of ponding.

Slick roads may have been to blame for several other accidents, including a truck that veered off Old Buffaloe Road, near Capital Boulevard in Raleigh, and crashed into an utility pole around 4:15 a.m. The accident caused power lines to fall, blocking the roadway for hours.

Truck off the road into a pole, lines down at Old Buffaloe and Capital Blvd in Raleigh. pic.twitter.com/E8BXHkmhNN

The slippery conditions also impacted drivers in Fayetteville. The northbound lanes of the Martin Luther King Jr. Freeway were closed from Gillespie Street to Hay Street around 6:40 a.m. because of a multiple vehicle accident near the off ramp to Robeson Street. Major backups were reported along 87 for hours as authorities investigated.

Schwenneker said the rain should push east of the Triangle through the afternoon, and dry, cooler air will move in behind the front tonight under clear skies. Temperatures will be cooler, down around 50 for an overnight low.

Temperatures will return to near normal Friday as high pressure gains control.

A second cold front that will have little or no rain will cross the Triangle over the weekend, taking temperatures down even more on Sunday.

After highs in the the low 60s Friday, and the upper 50s Saturday, highs may only be in the 40s Sunday and Monday with morning temperatures into the frosty 20s. Sunshine will prevail most of each day from Friday through Monday.