Raleigh acorn getting a facelift for New Year's Eve celebration 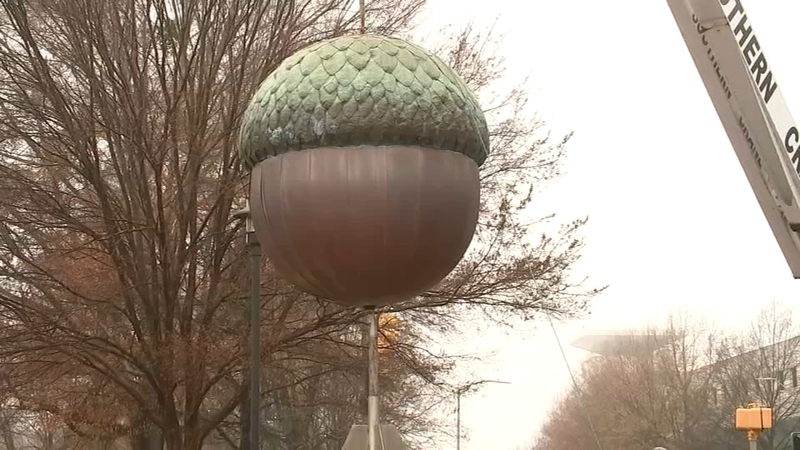 Where did the Raleigh acorn go?

"It's really the first thing that makes us realize that we're almost here for the new year season," said Cameron Laws with Artsplosure/First Night Raleigh.

This morning, the Raleigh acorn left its stand at the Duke Energy Center for the Performing Arts lawn to get a quick facelift before it takes center stage.

"New Year's Eve is so festive and we want it to be nice and bright and shiny as we ring in a new year together," Laws said.

Constructed out of copper and steel in 1991, the acorn will drop while the city of Raleigh counts down to the New Year. Every year, it's removed and taken to its designer David Benson, who polishes the 1200-pound sculpture. But this process hasn't always been an easy one.

Two years ago, city crews nearly cracked the acorn-dropping and damaging it. For some, it's now nerve-wracking to watch.

"I'm always a little reluctant whenever we're moving art," said Stacy Rexrode, Office of Raleigh Arts. "But I have to say we've definitely worked out this process."

But Southern Crane says they're up for the task.

"We kind of feel the pressure but my guys, they're into pressure anyway. That's the name of the game in the crane world," said Gary Brown, Southern Crane.

In less than an hour, the job was done. The acorn went off to get ready for its big night.

There will be an early New Year countdown at 7 p.m. on New Year's Eve. Then the traditional countdown will take place at midnight.
Report a correction or typo
Related topics:
societydowntown raleighraleighnew year's evenew year's day
Copyright © 2022 WTVD-TV. All Rights Reserved.
TOP STORIES
Cooper 'more concerned' about this winter storm than the last one
Snow fall begins in some parts of central North Carolina
Schools in Wake, Durham counties to close Friday
Contact tracers' role changes as pandemic reaches new heights
Flavor District, Triangle's largest 'ghost kitchen' to open in fall
Residents in Wilson prepare for black ice and snow
LATEST: Many testing sites closed Friday because of winter storm
Show More
Reporter hit by car on live television, but continued reporting
Check your tires before -- and after -- the wintry weather
American Airlines flight diverted over maskless passenger
'We can't get any more': Stores struggle to restock shelves
Essentials to keep in your car during winter storms
More TOP STORIES News