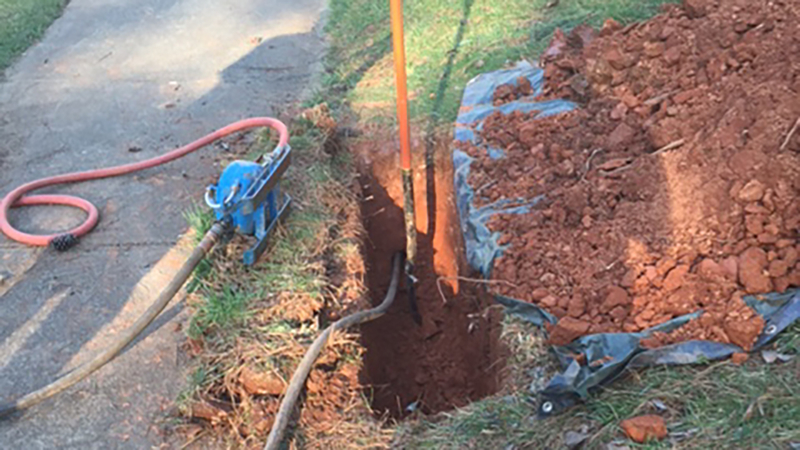 RALEIGH (WTVD) -- The city of Raleigh and AT&T are investigating a resident's claims that AT&T contractors were digging directly in his front yard, outside the right of way.

Palmiter said he didn't know crews would dig right on his property so he demanded they stop. He says the contractor called the police and it was eventually discovered crews were digging outside the right of way.

"It's a whole lot easier for them to run it through people's yards and then when somebody questions them about it, say [they] have permission," Palmiter said.

Late Wednesday, Otto told ABC11 "now that the survey is complete, we have determined that the work was done outside the city right-of-way."

Otto went on to say: "I have spoken with the responsible parties involved and asked how they plan to resolve the issue. They're currently discussing how to proceed. It is the objective of the city to make certain contractors are in full compliance with city codes and provisions. That being said, we will monitor the situation and ask that citizens contact the city with any concerns."

"We're expanding and enhancing our local network to deliver high-speed Internet access to parts of the Field Stream Farms neighborhood and have worked to keep residents informed of the construction and faster Internet speeds to come, up to 1 gigabit per second.

Our crews are trained to obtain proper permitting, closely follow local construction codes and work to minimize any disruption for residents. As always, upon completing our network expansion we will return property owners' yards to their original state. We apologize for this inconvenience."

Crews have been patching up the holes. But several of Palmiter's neighbors in the Fieldstream Farm neighborhood in Raleigh are still upset crews are digging in their front yards, ruining their landscaping.

"I just bought my home less than a year ago and saved up and invested what money I had in taking down trees and renovating my lawn," said resident Jill Cartwright. "And now all of that landscaping, less than a month after it's been completed, is now been torn up."

"I understand progress," said resident Jeanne Bottum. "I'm all for it but they shouldn't be on this side of the sidewalk. They should be over here."

Palmiter has some advice for homeowners: "Know that your property is yours, that nobody can build on it or cut across it without your permission, without something in writing that says they can be there, without you signing off saying that they can have an easement across my property," he said.