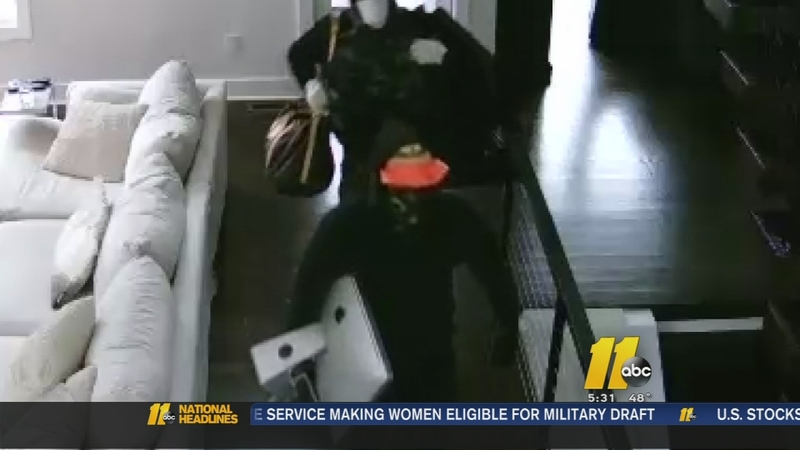 RALEIGH (WTVD) -- Kelly Gibbs said her sense of security feels shattered after thieves stole over $10,000 worth of jewelry, computers, and designer items from her home.

Now, she's asking for the public's help to identify them, because the thieves were caught on video.

"It's very terrifying," Gibbs said. "Just because you have a security system, and you feel like you live in a safe neighborhood, that is a very false sense of security."

This is the season for break-ins, she said. Gibbs said three men wearing masks and gloves can be seen on her home's security camera system, hauling away her family's stuff. She suspects a fourth person might be behind the wheel of the pearly white Nissan they got away in.

Gibbs said she recognizes the Nissan because it's been idling at the end of her street for three weeks, but that she didn't think anything of it because people often get turned around there when their GPS routes them the wrong way.

Gibbs says she feels targeted, and thinks the thieves spent time learning her family's schedule. Surveillance videos show the thieves struck during the middle of the day, when she and her husband were at work and their 9 and 10-year-old kids were at school.

"You feel violated," Gibbs said, tears welling in her eyes. "This is a complete violation. My children have slept with us for the past two nights. I have small children that are terrified of their own home, and no child should have to go through that. I'm terrified to leave my home because I'm afraid somebody's going to come and rob us again."

Still, she says, she's hopeful the burglars will be caught, as one left behind a hand print and DNA.

She says there's a reward out for information leading to an arrest, and issued a call to action to the thieves.

"I do have a message for you - turn yourself in," Gibbs said. "And if you know who did this, you turn them in. This is not ok to instill fear in little children and innocent families. It's not ok."