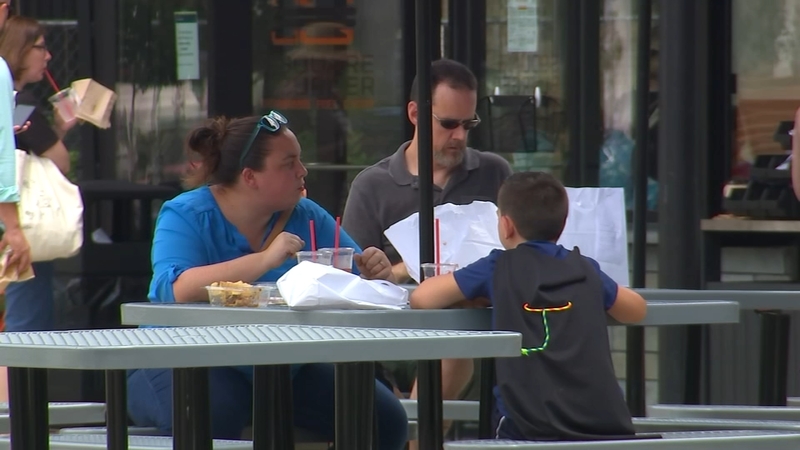 RALEIGH, N.C. (WTVD) -- If it seems like Raleigh is constantly changing before your eyes, it's not your imagination.

A new report shows record sales in and around the downtown area, and the trend shows no signs of letting up.

The Downtown Raleigh Alliance's second-quarter economic development report shows consumers set a record for food and beverage sales in April and spent a total of $66.7 million over the quarter.

Downtown Raleigh Alliance President & CEO Bill King said a lot of that growth is fueled by the growing number of dining options in the area.

"In 2019, I believe 22 storefront businesses opened, that does not include food hall tenants," King said.

More people living and working downtown is also giving the economy a boost.

The report shows an occupancy rate of 96.2% for downtown office space and an estimated 48,000 employees in the area. Hundreds of new condos and apartments are also under construction.

King also says keeping a good balance of public and private investments is important to keeping the growth momentum going.

"What's been nice is that you've seen some really good public investment that's helped stimulate private investment. Think about the Warehouse District you've got Union Station, which the city has put in a great deal of effort, beautiful building. Right across the street you have The Dillon which is private development, added a lot of density to that district. They architecturally have a similarity so they kind of almost speak to each other, so it's a nice sort of way of showing how you're seeing development from both the public and private sector interact and you're seeing a much more vibrant city."
Report a correction or typo
Related topics:
businessraleigheconomybusinessfoodretaildrinkingraleigh newstourism
Copyright © 2022 WTVD-TV. All Rights Reserved.
TOP STORIES
Thousands lose power after strong storms, flooding possible Tuesday
Car plows into Raleigh home after chase with police
One woman hurt in Raleigh stabbing
US to release monkeypox vaccine from national stockpile: CDC
Durham police investigate fatal shooting, crash along NC 55
'We sinned': Southern Baptist leaders react to report on sexual abuse
Congresswoman announces $3M for strollway between Chavis, Dix parks
Show More
Johnny Depp, Amber Heard trial: Kate Moss expected to testify
NFL QB Dwayne Haskins legally drunk when he was hit, autopsy shows
Duke pediatrician warns about baby formula shortage impact
Homeless veterans get an assist from Durham's Rotary Club
Truck slams into NC woman's new home
More TOP STORIES News