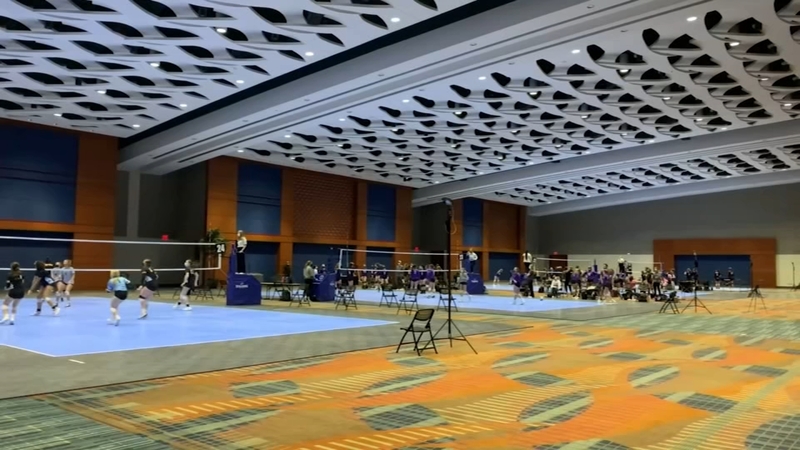 RALEIGH, N/C/ (WTVD) -- There is a welcome boost for the downtown Raleigh businesses this weekend, as thousands of volleyball enthusiasts are in the Triangle for a two-day tournament.

Health and safety are a top priority for organizations of this tournament as it's attracting nearly 2,300 people here in downtown Raleigh.


This is the first tournament at the Raleigh Convention Center since the COVID-19 pandemic shut down the event space last March. It's also the 13th annual tournament of the Mid-Atlantic Power League sponsored by the Triangle Volleyball Club.

One hundred and fifty-eight teams traveled from as far away as Pennsylvania and Georgia.

Everyone walking through the convention center doors must have their temperature checked and pass a health screening, plus masks are required at all times, even for players.
To make this tournament possible, organizers had to change the footprint on how the courts are typically set up, which includes divider walls in between courts.

"We made pretty tremendous financial sacrifices to adopt a format that would allow this event to happen safely in our town," said Sherry Fadool of the Triangle Volleyball Club.

Part of that format, parents must stay outside of the convention center. Steven Barbosa's daughter plays in the tournament and says it's tough not watching from the sidelines.


"We actually have to watch it on the TV, streaming-wise, it's only the players, it's only one referee, it's the best you can do in order for them to be allowed to play," Barbosa said.

Jaime Russell who traveled in from Virginia so her daughter could play in the tournament says not being inside the convention center is tough, but they're happy the teams at least get to play.

"Cheer them on from where we are at," Russell said. "They know we are supporting them but it's definitely really hard not being able to be in there with your child, but at least they get to play that's the main thing."

The tournament attracted more than two thousand people to downtown Raleigh, with 14 different hotels getting in on the action.

"That's going to bring in a grand total of about two million dollars in economic impact to the area that's very needed," Scott Peacock with the Greater Raleigh Sports Alliance said.

Downtown Raleigh businesses are welcoming the extra foot traffic for the weekend.

Several of the restaurant's owners and managers say this is the busiest they've been in weeks as players, coaches and their families are dining in and grabbing takeout.

Robin Rosser and her mom traveled from Charlotte for the tournament and said they've enjoyed eating at the various downtown restaurants.

"This is our team bonding for the weekend, so now we got our food and get fueled up for tomorrow," Rosser said.