Don't miss your chance to see WWII planes at RDU 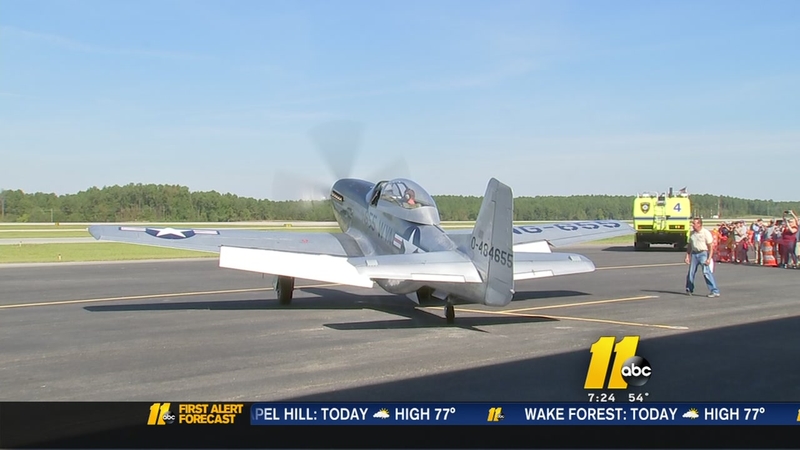 The roar of a P-51 Mustang as it prepares for takeoff at Raleigh Durham International Airport is an impressive sound...one that provides a vivid reminder of life for the men and women who served America during World War II.

We met some of their relatives during our Saturday coverage of the Wings of Freedom tour.

Mike Fegely, stood in a long line for a look inside a vintage bomber.

We also met 94-year-old veteran Bill Hoffman, who helped to build bombers during the war.

"Oh yes! I wanted to see 'em again, though," said Hoffman. "I had forgotten how many screws and rivets are in one of these things!"

And along with those veterans of WWII, you could see people who have a lot of reverence for their service, as well as the planes themselves.

"I'm one of the baby boomers, and I grew up in America's golden age because of what these guys did," he said.

Wilson told us about a Texas man he met, who shared information some of you may read here for the first time:

"His mother was trained as a pilot, and her role was to ferry these planes from the factory in Fort Worth to the bases where they were deployed.That's what a lot of women were doing in the Second World War, and it's a little-known story."

When the P-51 Mustang we saw take off returned to RDU about 30 minutes later, pilot William Morrison was eager to talk about his experience flying the fighter plane.

"I had a fantastic time! You should go yourself," he suggested.

The last day to see history up close will be on Sunday.

Admission is $15 and costs for taking a ride in those planes range from $400 to $3300. But once you're inside, you can tour the planes on the ground for no additional charge.
Report a correction or typo
Related topics:
societyrduairport newshistoryveteransairplane
Copyright © 2022 WTVD-TV. All Rights Reserved.
TOP STORIES
Officials: Buffalo, Uvalde shooters allegedly abused animals
Canes seek series lead against Rangers in game 5
OBX beach goers urged to wear shoes on beach
Onlookers urged police to charge into TX school: 'Go in there!'
UNC softball player to coach in summer baseball league
Columbine survivor reacts to Texas elementary school shooting.
Kevin Spacey charged in UK with 4 counts of sexual assault
Show More
RDU adds new airline, another adding several new routes
Should you talk to young kids about mass shootings? And how?
Fort Bragg soldier killed in Afghanistan to be honored
Timeline breaks down Uvalde shooter's movements day of massacre
In video, 'angry' NC Gov. Cooper pushes for stronger gun laws
More TOP STORIES News