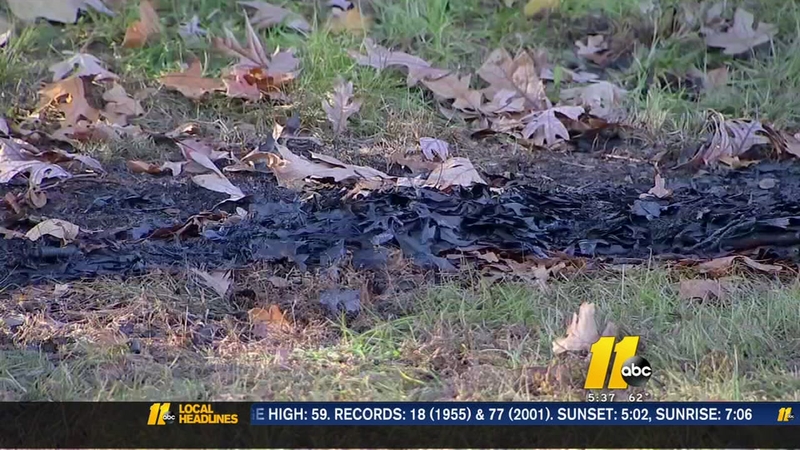 RALEIGH (WTVD) -- A series of fires over the course of a few weeks has many North Raleigh residents upset and concerned. Piles of leaves waiting to be collected by the City of Raleigh have caught fire in the North Forest subdivision and surrounding areas. It is unclear how many, if any, were set intentionally.

"It's mind boggling to see this," said North Forest resident Jim Lee. He's lived in the community for over 40 years and has never seen anything like this. "I really think it's somebody just playing a prank. I can't say a whole lot because I did pranks like that myself when I was a kid but I never did start a fire. Soaping windows, kicking a can, or turning over trash cans, but never a fire," he said.

A North Raleigh woman says these leaves caught on fire in front of her home last night. But was it an arson or an accident? #ABC11 pic.twitter.com/2jb2N4oIDo

According to a spokesperson with the Raleigh Police Department, at least 10 other cases of arson have been recorded in the city since October first. The city would not comment if they believe each case is connected.

In a neighboring community on Thanksgiving night, one woman suffered a broken foot and leg as she fell down a flight of stairs in her home as a fire burned in her front yard. In a post on Nextdoor, the woman writes, "I can't walk. I can't drive or go to work for the foreseeable future. I am in a lot of pain."

Her husband, and other families, attempted to put out the flames with their garden hose but were unsuccessful. Fire crews arrived a short time later to extinguish the fire.

Wednesday afternoon, leaf collecting crews removed the leaves from their community. "The leaves make a tempting target. And they're gone now," said the woman's husband. "But now the worry is what if they start a fire in the surrounding woods somewhere that can spread to a home?"

In a separate incident, the husband said the community's free book exchange box was burned and destroyed. Neighbors believe kids are behind the crime.