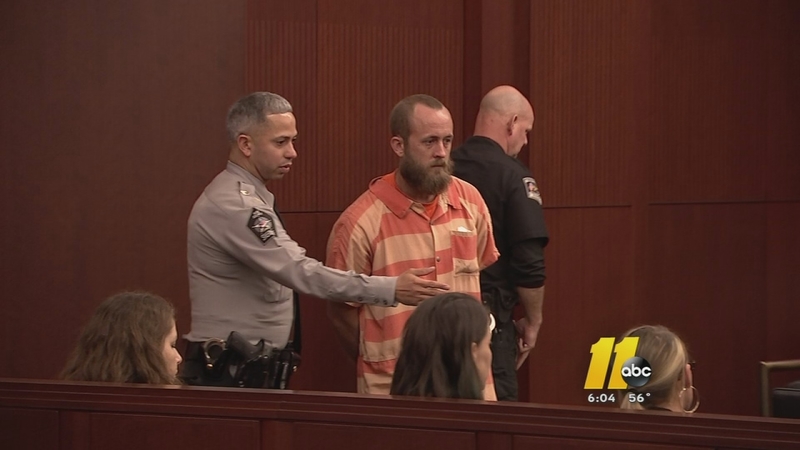 RALEIGH (WTVD) -- A Raleigh man accused in a hit-and-run that landed a man in the hospital tried defending himself in court Wednesday.

Police charged 32-year-old Jared Lemm with assault with a deadly weapon with intent to kill and felony hit and run.

Officers accuse Lemm of plowing over Bruce Thompson, 44, of Garner on Poole Road after rear-ending his truck at the 440 intersection.

At his first court appearance Wednesday, Lemm tried explaining to Wake County District Court Judge Keith Gregory why he turned himself into authorities the night before.

"I originally came forward to kind of contest my side of the story," he said. "I was threatened by a gun."

Gregory quickly interrupted him, reminding Lemm anything he said in court, the district attorney could potentially use against him.

Hit-and-run suspect to judge: "I was threatened by a gun." Details at 4 on @ABC11_WTVD pic.twitter.com/teMh1sCIJb

Lemm acknowledged he understood, but asked the judge if he could lower his $250,000 secured bond. The judge denied the request citing a prior misdemeanor conviction and a potential danger to the public.

Prosecutors revealed in court, Thompson's injuries include several broken ribs, a broken left shoulder, and multiple fractures to the left side of his face.

Thompson's neighbor, Rae Ann Wagner, said she first learned of the incident on the radio.

"I didn't want it to be Bruce," she said. "I mean- it's like you don't want this to happen to anybody, let alone to somebody that you know."

Wagner said Thompson is a loving husband and father of three. While police said Thompson and Lemm knew each other, Wagner had never seen him in their neighborhood.

"Bruce is a wonderful guy, really down to earth and would do anything for you in a heartbeat," she said. "And to think that somebody did this intentionally to him, I don't understand- I don't understand people."

Lemm is due back in court Jan. 6. Prosecutors said the arrest warrant should have included a stronger charge of assault with a deadly weapon with intent to kill inflicting serious injury, and prosecutors may explore replacing an existing charge with the upgraded felony charge.