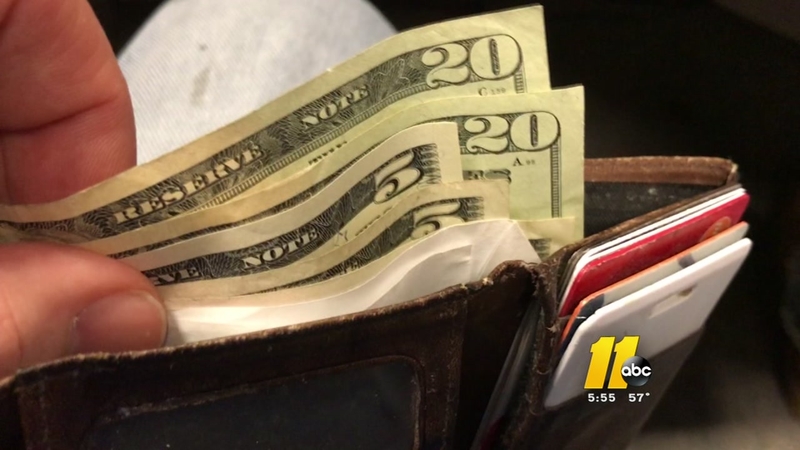 RALEIGH, N.C. (WTVD) -- A jury duty scam is making the rounds once again, and this time it cost one Raleigh woman more than $500..

Like many others, Joedy Black got an unexpected call about missing jury duty. The scammer told Black that she would be locked up because she didn't serve her juror summons.

"It was a misdemeanor offense and this guy sounded really official, and I was scared to death," Black explained.

Black listened carefully as the caller, who claimed he was with the Wake County Sheriff's Office, said she'd be arrested if she didn't pay up.

The man said her bond would be almost $1,500 and that sent Black into an instant panic.

Without thinking twice, Black scrambled to get as much money she could. She got $500 and was instructed to load the money onto a prepaid debit card. Once she got the card, she read the numbers on the back of the card to the scammer.

"They had police scanners in the background, so it sounded like they were at the police station or the Wake County Sheriff's Office waiting to come arrest me if I didn't do what they told me to do," she said.

Even after getting the money, the scammer called back for more, but by that time, Black had realized that she'd been scammed.

One big reason Black said she fell for the scam is the number she used to call the scammer back. It had a 919 area code and when you call it, you hear this message... "You've reached the Wake County Sheriff's Department..."

The scammer even used a dial directory in their recording to make the scam seem legitimate.

I tried to reach a real person, but this time, I was only able to leave a message.

As for Black, she hopes no one else loses money to this scam as she did.

"It was the fear, they are coming to come arrest me. I was terrified that's all I can say, and I'm just really embarrassed," she said.

Black has reported this incident to authorities.

It's important to note, you can not be fined by telephone for missing jury duty, nor can you be arrested.
Report a correction or typo
Related topics:
raleightroubleshooterscam
Copyright © 2022 WTVD-TV. All Rights Reserved.
TROUBLESHOOTER
Apex dog owner warns others after pharmacy's medication mishap
New Wi-Fi device this holiday? Protect yourself from hackers
Wake County tenants, landlords waiting months for assistance
Are extended warranties worth it on back-to-school laptops?
TOP STORIES
Winter storm moves out, refreeze possible overnight
NCSHP reports 200 crashes statewide, urges drivers to stay home
Monday events canceled, postponed due to winter weather
Why do we get freezing rain instead of snow or sleet?
FBI identifies hostage-taker at Texas synagogue
How to drive on snow, ice and get out of a skid
Expect more worrisome COVID variants after omicron, scientists say
Show More
After Biden's first year, the virus and disunity rage on
Novak Djokovic leaves Australia after court rejects visa challenge
Ukraine claims Russia behind cyberattack in 'hybrid war'
Hostages in N. Texas synagogue 'out alive and safe,' Gov. Abbott says
Man shot, killed by officer at Duke University Hospital
More TOP STORIES News