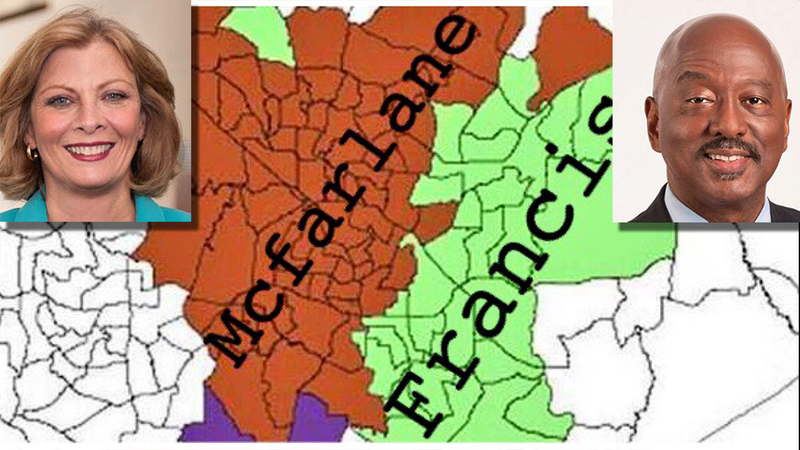 RALEIGH, North Carolina (WTVD) -- For the first time in a very long time, a competitive race for mayor is underway in Raleigh. But after years of easygoing elections, a race like this is causing divisions - splitting down party lines, racial lines, and class, too.

After three terms in office, Mayor Nancy McFarlane won 48 percent of the vote in her re-election bid - 12 points more than challenger Charles Francis, but below the 50 percent she needed to avoid a runoff.

The election precinct map from October 10 shows a clear line right down the city; McFarlane winning the west, Francis winning the east.

Tuesday in southeast Raleigh, where Francis won handily, his supporters strategized on how to get out the vote in the November 7 runoff.

"I have seen that he is very sincere and that he is ready to talk about the low-income and the suffering of our community," Powell said.

Powell said she thinks Raleigh's most vulnerable sections are being sacrificed in favor of newer, wealthier residents and business - all under McFarlane's leadership.

I would've told [Mayor McFarlane], Nancy you can't forget the people that are being pushed out," Powell said.

NEW AT 11: The Raleigh Divide:
How the city's first competitive mayor's race in years is dividing the city. #abc11 pic.twitter.com/CznTO8To3b

In north Raleigh, Brian Fitzsimmons, a McFarlane supporter, made the case that the mayor fights for all residents.

"For whatever reason, there is the sentiment that the mayor does not do what is necessary for all of Raleigh to prosper," he said. "And, I can't disagree more with that sentiment. She has been an advocate for every resident of this city no matter where you live."

But Fitzsimmons has seen that election map.

"What the map does show you, is that there is a divide," he admitted.

It's a political divide, too.

Fitzsimmons is the former chair of the Wake County Democratic Party. But he's supporting McFarlane, who's unaffiliated, even while Francis is a registered Democrat.

"I have been in awe over the past few years of her ability to navigate just the divisiveness that comes out of Jones Street," he said. "I can see no reason to change that simply because someone has a Democrat by their name."

And while Mayor McFarlane may not have the endorsement of the Wake County Democrats, as of Monday night, she is the sole candidate being endorsed by Equality NC.