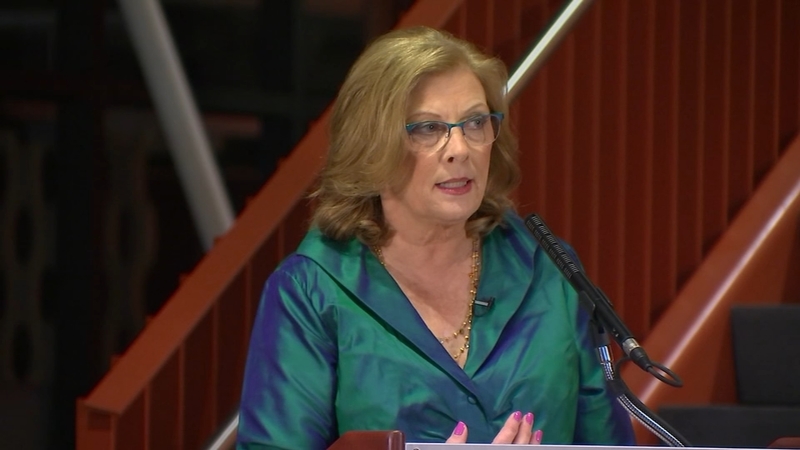 RALEIGH, N.C. (WTVD) -- With just 31 days left in her tenure as the 35th mayor of Raleigh, Nancy McFarlane's final speech on the state of the city also had the feel of a farewell address. And she sat down with ABC11 to reflect on the past eight years.

Mayor McFarlane regaled the crowd at Union Station with a story of her recent interview with Southern Living Magazine. She was asked to describe Raleigh in one sentence.

"I said we are a glass of sweet tea with a shot of vodka," McFarlane said.

But this is "last call" for McFarlane -- at least as mayor.

Before she delivered her final State of the City Address, McFarlane shared with ABC11 why she decided to walk away from city politics after more than a decade (eight years as mayor; four on city council).

"I've been doing this for 12 years and I think it's time for a change," she said.

But that's not the only reason.

When McFarlane returned to city hall last spring, following months of rehabilitation from back surgery, she released a video decrying the growing political partisanship gridlocking city council. We asked if that was part of her decision against running for re-election.

"That was probably a little bit of it," McFarlane said. "I mean, I think that was a statement on politics in general. If you look across the country, it's been personalized."

The tone of city politics came up in her address. "So let's stop dividing ourselves," McFarlane told the crowd.

The mayor counts the push to create Dix Park as a crowning achievement.

Turning 306 acres of state-owned land into a destination park in the heart of the city, started with a partnership with then-Governor Bev Perdue. They agreed on a 75-year lease for a nominal price.

"And then when (Perdue) left office and we got a new governor (Pat McCrory), the legislature didn't feel that was a fair deal. So, they wanted to invalidate the lease," she said.

The city offered to pay $30 million. The Republican-led legislature wanted more than double.

"And Governor McCrory agreed to a standstill agreement with me. So we spent the next year and half working out a deal," she said.

Ultimately the city agree to the state's sale price of $52 million.

"We still hear about it," McFarlane said. "The last time I was in Europe, people were talking about it, which just floored me. You don't want to be known as the bathroom state."

After months of protest, including personal calls from McFarlane to McCrory and state lawmakers, HB2 was largely repealed.

Sitting down with Raleigh Mayor Nancy McFarlane before she delivers her final State of the City Address.
• • •
We’re really at a point where we’re going to face some new challenges. But, we have a great new opportunity. And I’m excited for this [new city council].” #abc11 pic.twitter.com/QAtrb6qYnF

"It has been my honor to serve you as mayor," McFarlane said as she concluded her speech at Union Station.

Mary-Ann Baldwin will be sworn in as mayor on December 2. What does McFarlane plan to do on December 3? She said, first off, just be grandma to her two young granddaughters. She also said to expect to see lots of her advocating for the Dix Park master plan. McFarlane intends to be a vocal member of the Dix Park Conservancy.
Report a correction or typo
Related topics:
politicsraleighdorothea dix parkraleigh news
Copyright © 2022 WTVD-TV. All Rights Reserved.
TOP STORIES
Canes fans pile into PNC for Game 2 despite COVID resurgence
Parents share mixed reactions over plans for boosters for children
Fayetteville PD on track to full staffing; what about Durham, Raleigh?
Mail delays blamed on dog, owner claims case of mistaken identity
Body found on the bank of the Tar River in Edgecombe County
Wake Schools bus driver charged with driving bus while impaired
'Thrilled to death': Princeton man wins Cash 5 jackpot
Show More
Raleigh breaks heat record set in 1938
Raleigh resident from Buffalo, NY weary one week after massacre
Judge: COVID-19 asylum restrictions must continue on US-Mexico border
A motorcycle's unforgettable ride back home
Trees downed, power outages reported after powerful overnight storm
More TOP STORIES News