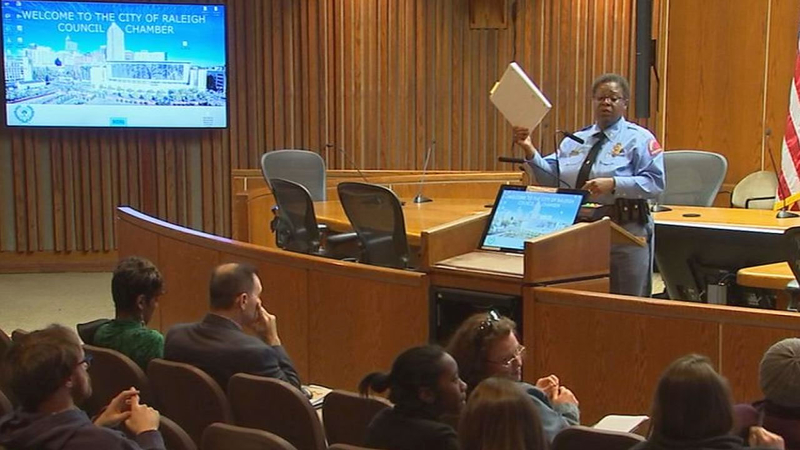 RALEIGH, North Carolina (WTVD) -- It has taken 18 months and 20 community meetings held all across the city to help draw up these rules of the road on police body cameras in Raleigh.

Tuesday night, the public finally got to see the finished product, or at least hear it read back to them by the chief of police.

This long road began in southeast Raleigh in February 2016 with the outrage after Akiel Denkins was shot and killed by a Raleigh police officer.

That officer was cleared of misconduct but the community demanded more accountability from police - a body camera on every officer.

She read the draft word for word from a PowerPoint presentation in city council chambers. The department did not provide copies of the document, nor did they post it online, and the chief took no questions from reporters.

Chief Cassandra Deck-Brown read through the body-cam policy completely. No copies provided, not available online, she took no questions from reporters.
Next stop: City Manager for approval, City Council for funding next month. pic.twitter.com/9xleft5Wgt

"I think overall we can be pleased," said Kimberly Munktarian with PACT, the Police Accountability Community Task Force. "We want to believe that RPD has our best interest at heart. But of course, Akiel Denkins shows us otherwise."

Susanna Birdsong, Policy Counsel with ACLU North Carolina listened to the chief's presentation as well: "I would give it a hard C, perhaps even a C-minus," she said.

One aspect of the RPD policy Birdsong is pleased with is that it allows for some leeway around strict new state laws barring body camera footage from being released to the public without a court order.

"So this policy really tightens it and there will be a 'presumption of disclosure' that (RPD will) show (the footage) to the people who are the subject of recordings, which is like the bare minimum," she said.

The draft also says officers will be disciplined for any misuse of a body camera, something advocates fought for. But the chief did not include specifics on potential punishment.

Critics still think there's too much discretion in the policy on when officers can switch the cameras on and off, and think it's unfair an officer will be allowed to view the video before they write a police report - while the public is restricted.

At the meeting's end, the chief insisted the draft would not be the final word.