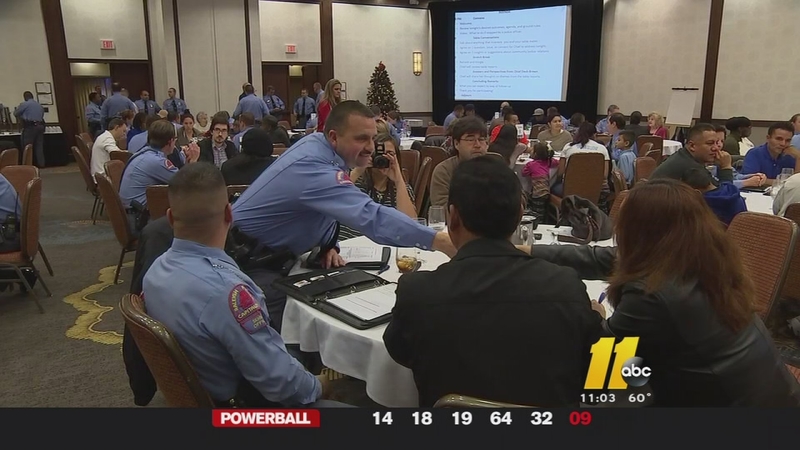 RALEIGH (WTVD) -- Raleigh Police Chief Cassandra Deck Brown Wednesday hosted the first of four meetings with the community that she hopes will help building a better relationship between police and citizens.

"In light of what we're seeing across our country with police and community relationships, I get asked a lot and I'm sure other chiefs do too, to come to community meetings and forums and talk and share what's going on in the police department," said Chief Deck Brown.

Wednesday night's forum was held at the North Raleigh Hilton. From 6:30 p.m. to 9:00 p.m. citizens had the opportunity to have round table discussions with officers, including the chief herself.

Their questions ranged from concerns specific to their neighborhoods to issues we've seen on a broader scale, such as the allegations of police brutality that have sparked protests in cities all over the country.

And in light of the horrific mass shooting in San Bernardino, California, ABC11 asked the chief about recent training the police force goes through to prepare for tragedies like that. Chief Deck Brown pointed out that while training is first and foremost, so is the relationship between police and community, which she hopes from these meetings, will get stronger.

"A meeting like this affords us to build those relationships so that those partnerships exist should that crisis arise," said Chief Deck Brown.

Wednesday's meeting was the first of four. The others are scheduled for the following dates: